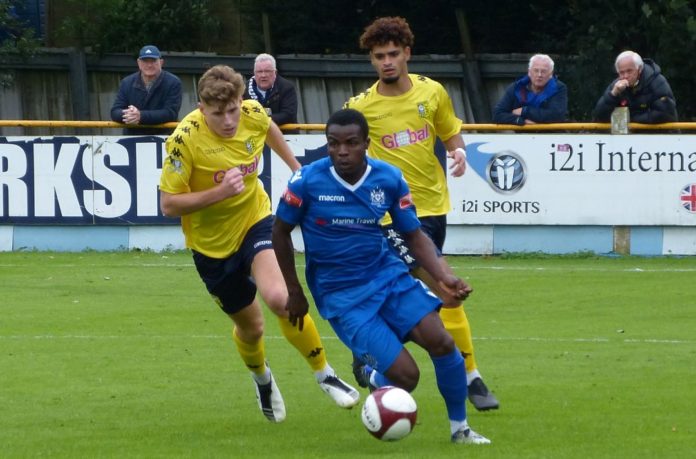 Staff and students at Trafford College will be tuning in to the third round of the Emirates FA Cup in the New Year to watch one of its apprentices play Tottenham Hotspur live on TV early next year.

Striker Neil Kengni’s classmates were delighted with the trainee plumber’s performance as he helped Marine FC to a 1-0 victory over Havant & Waterlooville FC, making FA Cup history as the second club from the eighth tier to reach the third round.

Neil is expected to form an integral part of the line-up for the ground-breaking match, set to kick off at the Liverpool-based club live on BBC One on Sunday 10th January at 5pm.

Neil has been studying plumbing at Trafford College’s Stretford Campus over the past two years, embarking on an apprenticeship with Horizon plumbers this summer.

He said: “I haven’t spoken about much about football in college, but when my course mates found out they have all being saying well done on the win and said they’ll be tuning in to watch the game.

“Studying plumbing then training in the evenings hasn’t always been easy, but college has been very accommodating. It has been madness at time to go home, get changed and drive to practice, but to be able to play matches, like this one against Spurs, shows it’s well worth the effort.

“I decided to study plumbing as a way of making a living while I’m playing football semi-professionally, and I’m loving it. College is like being part of a big football team. Tutors make clear what is expected of you, give you support and show you where to find it in order for you to raise your game. The only area of disagreement is which football team we support.”

Head of studies for plumbing for The Trafford College Group, John Ellis, added: “We’re all extremely proud of Neil’s performance in plumbing as well as on the pitch. I know many of our staff and students will be watching the next stage of the Emirates FA Cup because Neil’s such a key player. We’re all in awe of what Neil achieves on the pitch after studying as an apprentice on placement and with the college all week. It’s not easy to juggle the two and we’d like to commend what Neil does week in and week out. Neil has our support every step of the way.”