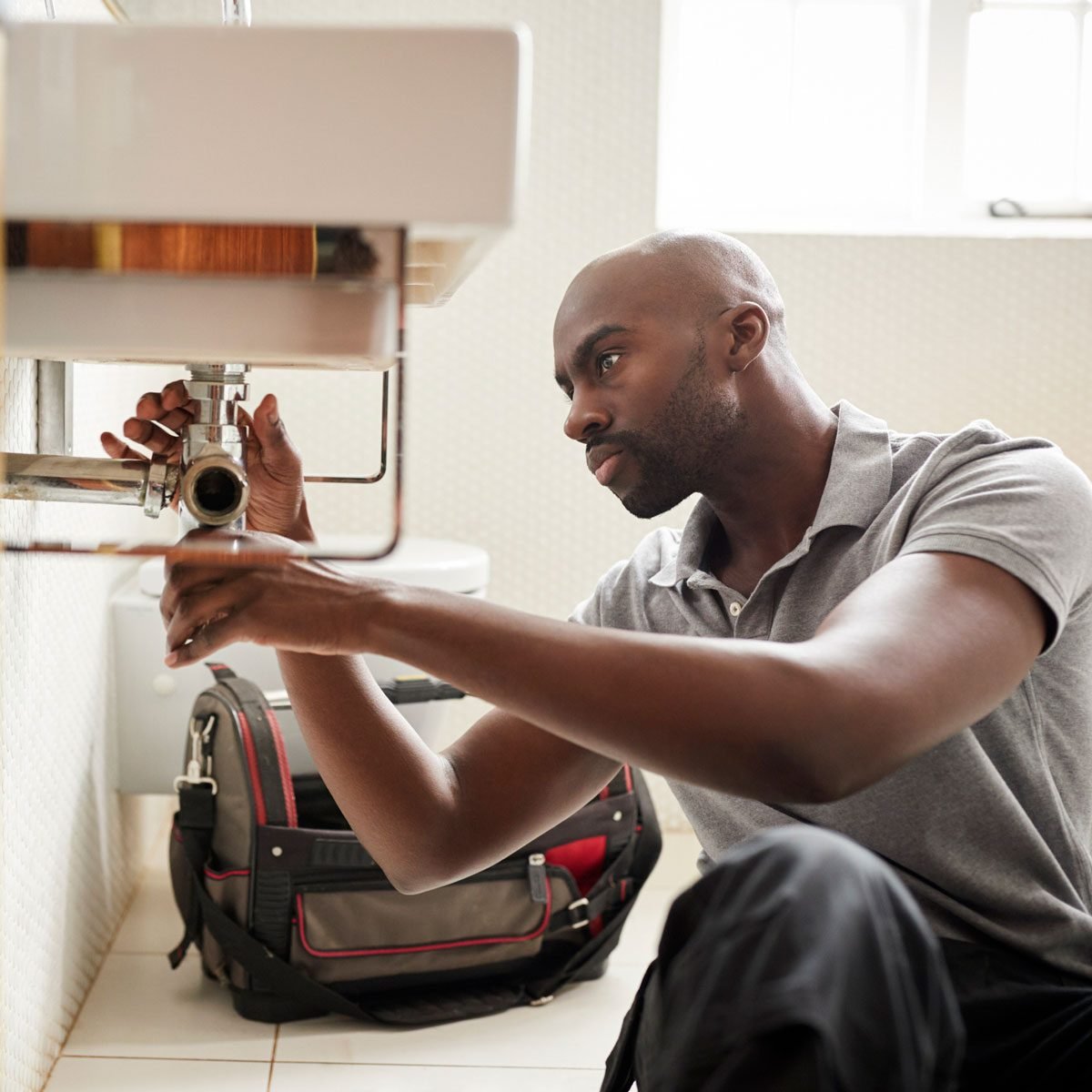 Every editorial product is independently selected, though we may be compensated or receive an affiliate commission if you buy something through our links.

Your bathroom has a plumbing problem, and you feel confident enough in your DIY dexterity to confront the issue on your own without a professional plumber. Before you get started, we recommend familiarizing yourself with a few important things — like what not to do.

The alternative? Risk making a mistake and wind up paying a plumber to do the repair anyway, which will set you back at least $45 per hour depending on where you live and the experience level of the plumber.

Here are nine bathroom plumbing mistakes to avoid when working on your sink, shower, tub or toilet.

You know the U-shaped curve in your drains? Those are called traps, and sometimes DIYers make the mistake of not using them, says Terry O’Shea, a plumbing manager for Roto-Rooter in the greater New York City area.

A lot of homeowners, he says, assume the trap is there to make it easier to retrieve items that are inadvertently dropped down the drain. However, the trap is actually there to prevent odors from sewer gasses from entering your home — so you absolutely don’t want to forgo it.

It might seem logical that the tighter you crank your plumbing connections (pipes, coupling and joints), the more likely they’ll stay put and not leak. Not so, says Aaron Mulder, co-owner of Mr. Rooter in San Antonio, Tex.  In reality, he says, if you take the tightening too far you will actually cause your fittings to split or even rupture.

Mulder suggests making sure fittings are snug, but not tight. A good rule of thumb is: For slip joint nuts and flexible supply lines, finger tighten and then tighten an additional one-quarter to one-half revolution. You can always tighten the joint a little more if it leaks.

We know you are eager to get going on that bathroom project. But you should never even starta plumbing project before turning off the main water line to your home. (The location of your main water line valve depends on where you live and whether you are on city water or a well). The disastrous potential consequences? Flooding! Avoid the troublesome and expensive cleanup by doing this quick-and-easy task first thing.

Note: Many sinks and toilets have shut-off valves located near the fixtures that allow you to make repairs safely without turning off water to the whole house. Know where your main shutoff valve is located and test it to make sure it’s working before starting any plumbing repair. This way, if your fixture shut-off valve leaks or you run into some other problem requiring you to close the main water supply valve, you’ll be prepared.

Copper, PVC, PEX polypropylene, galvanized. Does it matter which type of pipes you use? It does, says O’Shea.

For one thing, you need to make sure you are doing things to code. Check out the Uniform Plumbing Code, the International Plumbing Code and your local municipality for details. Furthermore, some types of pipes are just plain hazardous. Namely, galvanized — they are prone to corrosion. “They rot on the inside,” says O’Shea. “It is like hardening of the arteries.” Galvanized pipes have also been implicated in lead poisoning.

Bottom line: Check the code, and stick to the type of plumbing pipe that’s suitable for the application and your budget, says Mulder. Copper pipes, for example, are strong and safe but spendy.

We’re not talking about singing in the shower here — we’re referring to the slope of your shower pan. If you get it wrong, it can be extremely problematic because the water won’t drain correctly, O’Shea says. Then, water can pool up. This is unsanitary to say the least, but O’Shea adds it can also contribute to mold growth.

What is the correct slope? It depends on code, but plumbers typically recommend that showers slope a quarter of an inch per foot. If this seems confusing, no worries — you can make this easy on yourself by picking up a pre-pitch standard installation kit at a home improvement store.

You’re installing a toilet, and you notice that the flange — the pipe fitting that connects the toilet to the drain in the floor — is cracked or chipped. If you’re thinking this isn’t a big deal, think again. Using a broken flange will make it difficult, if not impossible, to get a proper seal on the wax or rubber gasket around the joint between the flange and toilet. That, Mulder says, can lead to leaking.

Is it repairable? Yes, says Mulder, and repair kits are sold at home improvement stores. However, he says this is more of an “advanced level repair,” so keep that in mind before taking it on.

That banging you hear coming from your walls? It is likely caused by a common DIY plumbing mistake: failing to tie down the pipes. When pipes aren’t tied down, they will rattle and shake when water runs through them, O’Shea says.

Strapping them in is fairly simple — you just need to install a hanger strap or tube strap. Timing is everything, though. If you forget to strap down your water lines during the initial pipe installation, you’ll have to cut into the drywall, obviously a much more labor-intensive undertaking.

The placement of a shower head should never be random. There is actually a standard height, and that standard is 80 inches up from the drain. Of course, this can vary depending on the height of the people using the shower (taller people sometimes prefer higher shower heads). But O’Shea warns that placing shower heads below the 80-inch mark can make them cumbersome to use, even for shorter folks.

Will installing a shower head too high cause a leak or some other plumbing calamity? No, but it could cause you to feel annoyed every time you step into the shower.

OK, so this “mistake” isn’t about the plumbing itself. But O’Shea warns it’s important to pay attention to the process as you go and to document each step so you know at what point you removed this pipe fitting or that gasket.

“Take pictures as you take (things) apart, or write it down,” he says. If not, and you put the pieces back together incorrectly or in the wrong order, you could wind up with additional plumbing problems later on.