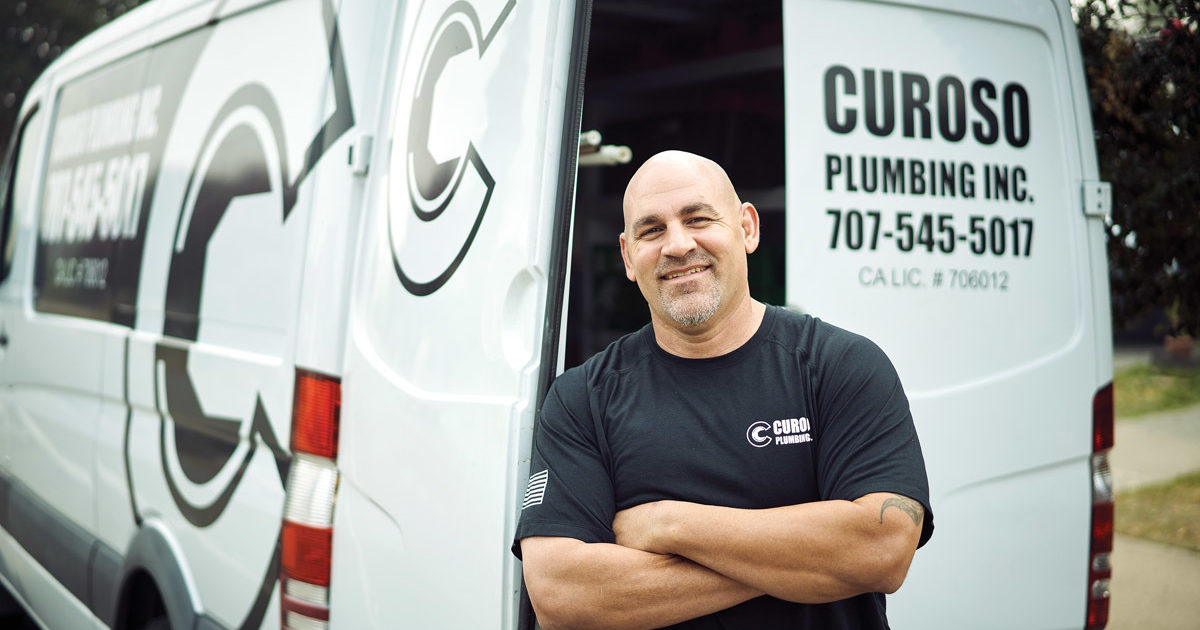 As a former collegiate and professional football player as well as a high school football coach, it seems only natural that Jim Curoso brings a sports-minded mentality to running his business, Curoso Plumbing in Santa Rosa, California.

From the way he manages employees to his focus on customer service and professionalism, the 44-year-old entrepreneur employs lessons learned from years and years of playing football: teamwork, pride, hard work, self-discipline and goal-setting.

And just like a linebacker focuses on tackling instead of trying to hone quarterbacking skills, Curoso focuses sharply on what he does well: Installing and repairing water heaters, a business niche that generates about half of his company’s revenue.

“There are a lot of things I learned in sports that I apply to plumbing,” says Curoso, who played linebacker at both Santa Rosa Junior College, Humboldt State University and San Jose State University. He then played for the two teams in the now-defunct National Indoor Football League for several years and in a European football league. Curoso also was a teacher at and coached football for a high school in Eureka, a small town in northern California.

“There are a lot of parallels between business and sports, like working hard, taking pride in what you do and setting a goal and going for it,” he continues. “In business, you also have to choose a good team and motivate people, just like in coaching.

In addition, if technicians are unhappy with work conditions, they aren’t as productive. So it’s important to listen to what they have to say and build a culture where everyone works together, just like a coach must do with a team, he notes.

So far, the sports mindset has worked well for Curoso, the second-generation owner of the company, which he bought from his father, Jim Curoso Sr., in 2013. He says the company’s revenue now is 10 times more than his first year in business.

“It used to be just me and an old Dodge truck and now we have three guys and I’m going full blast,” he says. “We’re absolutely swamped with work.”

Of course, it helps immensely that two of the company’s technicians — Clint “Bubba” Merz and Isaac Byrd — are lifelong friends of Curoso. And the third technician, Dan Bellucci, was hired based on a referral from a friend. Bellucci started out as apprentices at the company.

“I went my first four and one-half years in business without any employees. I really didn’t want to have employees,” Curoso says. “I wanted to do everything myself. It seemed kind of scary to have someone else turning a wrench on jobs when your name is on the truck.

“But things got so busy that it had to happen,” he says. “And they’ve been invaluable. I trust them completely. Now we’re blessed with plenty of work.”

Curoso’s father parlayed a stint as a pipefitter in the U.S. Navy into a plumbing career when he bought a company called Davey Drain in Santa Rosa, which is about 55 miles north of San Francisco.

“When I was a kid, I went with him on jobs as often as I could,” Curoso recalls. “I was his human backhoe, helping to dig up busted water and sewer lines. He’d pay me $20 and I thought I was getting rich.

“Sometimes he’d pull me out of school for big jobs, which I thought was great,” he continues. “It was a lot of fun for me, making money and hanging out with my dad, then going out for Chinese food after work. It was the greatest time ever.”

He also learned a lot from his father about running a business — things like building relationships with clients, being presentable and professional and following through on promises made to customers.

Later, Curoso graduated from Humboldt State with a degree in sociology. “I majored in football and minored in sociology,” he quips. He then went on to earn a master’s degree in education at the University of Phoenix before embarking on his professional football career, then trading in cleats for classrooms as a high school teacher.

But his love for plumbing never waned. “I still did plumbing work on the side,” he says. “I always missed the simplicity of plumbing.”

So in 2008, he went back to Santa Rosa to work for his father. Curoso was his father’s only employee and a large part of the small company’s business revolved around working as a subcontractor for Sears, installing water heaters.

Curoso estimates he installed more than 3,000 water heaters while Davey Drain was a Sears subcontractor, which explains his continued focus on water heaters after he bought the company from his father and changed its name to Curoso Plumbing.

“I got tired of constantly explaining to people why the company is named Davey Drain and Plumbing,” he says. “Plus I just wanted to put our family name on the truck. We kept the same phone number and license, so it worked out well.”

On average, the company installs seven to 10 water heaters a week. The company’s marketing efforts, including search engine optimization on its website, are also geared toward generating water-heater business.

Why the sharp focus on this market segment? First of all, it was a niche business sector at which he excelled. “I can pretty much install them with my eyes closed,”

“When someone’s hot water goes out and you restore it, they have a smile on their face,” he says. “And you can usually install them in a day, so there’s almost instant gratification.”

But the company focuses on more than just water heaters. It also installs boilers and does commercial and residential service and repair, kitchen and bathroom remodeling, pipeline video inspections, drain cleaning and water, gas and sewer line repairs, to name a few.

To perform all those services, the company relies on a variety of equipment, including power tools made by Milwaukee Tool, Channellock pliers, six drain machines made by Gorlitz Sewer & Drain (a model 380 and 68 HD on each of the three service trucks), a RIDGID SeeSnake Compact C6 inspection camera and a RIDGID NaviTrak Scout pipeline locator.

“I think they’re one of most presentable vehicles out there,” Curoso says. “I bought one and saw an instant improvement in credibility. When you show up in an old Dodge truck, customers look at you a little differently. It’s like when you dress up in a suit. It makes a difference when you look like a professional outfit. Our trucks are a big part of conveying a professional image and branding.”

Another benefit: the Sprinters’ diesel engines get more than 20 mpg, almost twice as much as Curoso’s original truck. The annual savings in fuel consumption has more than made up for the higher initial purchase price, compared to other service vans, he says.

Whether it’s answering his cellphone 24/7, avoiding hard sells on products and services or leaving job sites as clean as they were before, Curoso strives to provide top-notch customer service.

“We always try our best to be there for customers,” he notes. “Unless I happen to sleep through it, I always answer my phone at night. And I try to be personable and honest — no pricing schemes, like a get-in-the-door service price.”

One of the first things Curoso did after buying the company was develop his own flat-rate pricing structure, which he believes offers a more honest and truthful pricing framework.

In addition, Curoso believes in doing the right thing when customers feel wronged. “I think all people really want is for you to be humble and truthful, and if something goes wrong, you have to ask what you can do to make things right,” he says. “Over the years, I’ve done a couple jobs for free. You can’t go wrong if you do the right thing, even if you lose money every so often.”

The customer-centric approach works well, judging from the company’s average rating of five stars, based upon online reviews from more than 100 customers on popular platforms such as Google and Yelp. The latter platform generates about 75% of the company’s service calls, Curoso estimates.

Many of the reviews mention factors such as honesty, courtesy, fast response, efficiency, punctuality, knowledgeability and professionalism.

The fact that Curoso doesn’t ask customers to post online reviews makes the five-star average rating across all platforms even more impressive. “It just feels different when you ask people to do something,” he explains. “If they’re going to do it, they’ll do it on their own and it’ll be more heartfelt.”

Curoso anticipates continued growth for his company, primarily through doing the same things the company currently does, just on a larger scale. The company also plans to open another branch nearly 2,000 miles away in Katy, Texas.

Why so far away? His younger brother, Greg, 39, lives there and is interested in duplicating his older brother’s success, Curoso says.

But of course, any additional growth in Santa Rosa also depends on being able to hire quality employees to handle the additional work, he says.

“My name is on the truck, so I’m never going to sacrifice quantity (of employees) for quality,” he says. “Any new employees have to be presentable and value the company’s principles. Like I said before, it’s like a sports team: You have to have the right players in the right positions.”