Stronger together - Plumbing And Heating Magazine 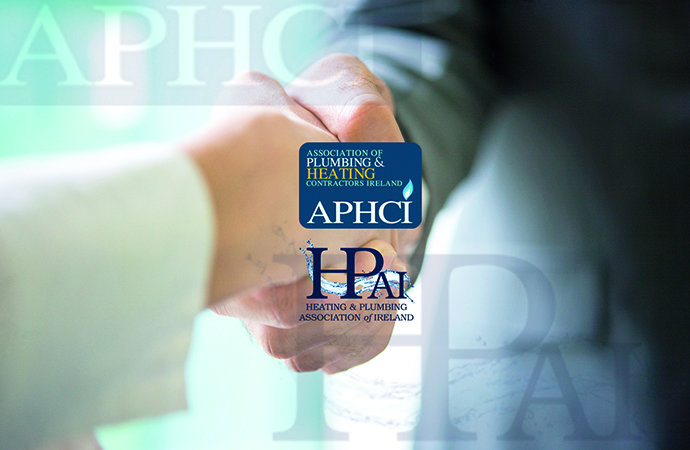 After months of discussion, HAPAI and APHCI, two of Ireland’s main representative bodies for plumbing, heating and allied trades industries have agreed, in principal, to pool their resources and move forward as a vibrant and more robust single body.

Heads of agreement have been formulated and a working group has been formed to finalise the details for presentation to the membership and industry. Given the spirit of co operation and good will in addition to shared visions, goals, sense of purpose and aspirations that have evolved between both associations over the past number of years, it is expected that the proposed merger will be warmly welcomed by the members of both the Association of Plumbing and Heating Contractors of Ireland (APHCI) and the Heating and Plumbing Association of Ireland (HAPAI).

Once endorsed by the membership, the new organisation will represent the majority of contractors and craft trades people engaged in the domestic and commercial mechanical building services sectors in Ireland.

Pat Jordan from APHCI comments, “This industry, like many other aspects of the construction industry, has evolved beyond recognition over the past number of years, with a continuous conveyor belt of new standards as well as an increasing and ever-tightening regulation, all of which are placing an increasing responsibility and administrative work load on the sector. This coupled with the Green Agenda, which this trade more than any other, has a major part to play and subsequently means that all operatives will require more knowledge and upskilling in the years ahead.”

Shane Henderson from HAPAI explains, “It is intended that the new body will be Fully inclusive, representing all sectors of the industry with equal zeal. Over time, it is intended that a comprehensive on-line data base accessible to the membership will be developed along with on-line tutorials on various topics along with comprehensive technical support. This will ensure that all operatives in the field can remain abreast of changing technologies and upskill as required at a reasonable cost at a time of their choosing.”

“Representation will also continue to be sought at Government level to ensure that the voice of the industry is heard loud and clear on all matters that affect them. While a system to streamline commissioning and certification issues is also on the radar,” says John Reynolds (APHCI).

“Having been working on various representative groups alongside APHCI over recent years, it was not long before we both recognised that we were the wings of the same bird and that we could represent the industry members stronger and better by working in harmony with each other. It seems the natural thing to do,” says Richie Burke from HAPAI.