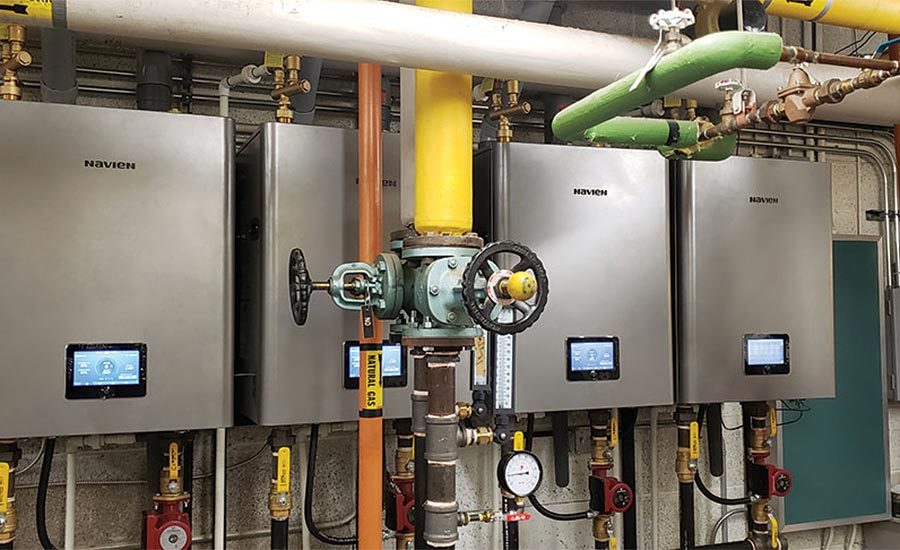 There have been numerous studies over the years touting all the benefits of hydronic heating systems, including improved comfort and energy efficiency. While these systems used to be more prevalent in the U.S. prior to the 1950s, builders began choosing warm air furnaces simply because they were a cheaper option than boilers. However, many industry experts think that could change with the advent of new hydronic products and technology presenting an opportunity for market growth.

According to Randy Oshiro, compliance and certification manager, Noritz, there is good market segment growth of combi boilers, as well as condensing boilers.

“Combi boilers reduce the amount of space needed in the mechanical room,” Oshiro notes. “Typically, you would need a separate boiler and water heater, and they are going to have separate vents, gas lines and electrical connections for each — that’s double the amount of equipment. Having a combination system condenses that all into one product, saving space. Also from the efficiency side, it’s one product, so there is only one set of flue losses.”

Another trend is a holistic approach to overall system efficiency rather than individual boiler efficiency, Oshiro adds.

“There is more awareness, not only from the industry and customer side, but also from utilities that the next real big gain is not going to be the efficiency of individual pieces of equipment, but as a whole,” he says. “Looking at how the system works together with the boiler, the thermostat and more, and how all of those play together and can create a more efficient overall system for the homeowner.”

“A lot of the products and technology we get comes from Europe, so combi boilers have been on the market for almost 40 years now, but they’ve only been in the U.S. the last 10 years or so,” he says. “Last year, in 2019, was the first year that the combi boilers caught up with heat-only boilers, so it’s about 50% of the market right now.”

The reason behind that growth is combi boilers are more cost effective and have a lower upfront cost, Avron notes.

“When you look at long-term maintenance, costs are reduced because you’re only maintaining a single appliance and not multiple appliances. So that’s a trend that we think is going to continue, that shift towards the combi boiler.”

Avron also points to more attention being paid to the entire system and to system best practices.

“Historically, contractors would install a cast iron boiler, and realistically the maintenance was very low on the system side of things,” he says.

“Condensing boilers have been on the market for 18 years now, and it’s taken us this long to make people aware of the pitfalls of not paying attention to the entire system, such as water quality, air and dirt separation, descaling and more. The benefits are numerous —doing these things provide longer life expectancy for all components of the system. The boiler, obviously, is a big investment for the homeowner, but so are system components, such as pumps, valves and other products. So it extends the system life, but also provides better energy efficiency over a longer period of time.”

Chuck O’Donnell, director of marketing for LAARS, says he is seeing the continuation of converting from standard efficiency to high efficiency equipment.

“Contractors and building owners are comparing long-term operational costs versus initial installation costs to shape decision making,” he says. “We're seeing a move towards equipment that utilizes oxygen trimming capabilities, or another type of electronic air-to-fuel ratio control, that optimizes efficiency. It's analogous to a car engine where it's always being monitored and adjusted for ideal performance. We've been adding those technologies to our commercial condensing product lines.

“It's important to distinguish between boilers that continuously monitor combustion and make real-time adjustments versus those that monitor, but then only intermittently adjust or never adjust the combustion,” he adds. “The benefit to real-time combustion management is, no matter what turndown the boiler is running at, it’s running at peak performance. Your efficiency levels aren’t only optimized at 100% firing rate, but also throughout the majority of the year when you’re firing at a lower rate — it provides stable performance and more reliable operation.”

O’Donnell notes utility rebates are driving these trends. “Also, many of these products have very low NOx emissions, so they’re looking at it from an environmental standpoint as well. Reduced gas use and lower emissions are driving that trend.”

The largest trend in the market relates to sustainability, electrification and decarbonization, according to Steve Swanson, national trainer at Uponor.

“What that means is requiring technologies to evolve and become more efficient,” he notes. “For example, the newest air-to-water heat pumps offer a coefficient of performance (COP) in the two, or even three, range. These products allow us to continue the positive hydronics message, since water is 3,500 times more efficient in carrying heat than air. Hydronics is the one, true sustainable delivery system for heating with higher capacity water over air without the need for environmentally unfriendly, and often toxic, refrigerants.

“Water is 100% reusable,” Swanson continues. “It is non-toxic, non-polluting, carbon neutral and offers zero ozone-depletion potential. Another trend is an all polymer piping solution for residential and commercial buildings to replace metallic piping. We are seeing a shift in the industry from metals to polymers because polymer piping systems, such as PEX or PP-RCT, offer greater system longevity due to their corrosion and rust resistance, plus they offer greater cost savings and require fewer chemical treatments.”

Swanson points to CO2 emissions when asked what is propelling this trend. These emissions are driving a climate change narrative, that, in turn, is causing local and state governments to mandate changes, he explains.

“New code changes are restricting or eliminating fossil-fuel heating systems for what is considered a more environmentally friendly electrification movement,” Swanson says. “The good news is hydronics is the perfect solution. Furthermore, the all-polymer piping solution trend is being driven by the desire to move away from mining metals for piping. Copper and steel piping cause large, open-pit mining that is environmentally not sustainable.”

According to Taco Comfort Solutions’ Director of Training John Barba, the biggest trend over the past few years is both the growing acceptance and understanding of ECM and variable speed technology.

“Early on, people thought this stuff was magic, meaning you just stick an ECM circulator in, press a button and it’ll figure everything out for you,” Barba says. “We saw the same thing with radiant floor heating and other technologies that have come along over the years. People like the idea, but they didn’t understand what it did or how it worked. We’re now seeing a growing acceptance of the technology, which goes hand in glove with people understanding how it works and what it does.”

Barba also notes the development and evolution of variable speed ECM technology has led to a greater understanding of the importance of the circulator in overall system efficiency.

“There is — and has been for years — a chronic over-pumping problem in our industry because of the products we had,” he explains. “When you’re over-pumping, you create a whole slew of issues, including killing or severely limiting the efficiency of the boiler by having it short cycle. Then, we also wear out all the movable parts and components prematurely.

Kevin Freidt, director of product management and technical support, Caleffi Hydronic Solutions, says the largest industry trends he is seeing include the use of magnetic dirt separation and balancing valves with built-in flow meters as well as using demineralized water instead of site water to fill the system.

“The industry is recognizing the importance of removing ferrous ‘dirt,’ specifically magnetite, from hydronic systems,” Freidt notes. “The magnetite coats the surfaces of the heat exchangers and dramatically reduces heat transfer efficiency, resulting in hot spots and premature failure of the metal.

“Filling a system with demineralized water instead of whatever water is available on-site ensures high-quality fluid for the system, removing hard water minerals such as calcium and magnesium, which lead to scaling,” he continues. “Demineralized water also reduces galvanic corrosion to maximize the performance and longevity of hydronic system components. And a balancing valve with a built-in flowmeter, such as the Caleffi 132 Series QuickSetter, saves significant balancing time and labor costs while eliminating the need for a cumbersome and complicated differential pressure tool.”

“We are hearing from contractors and plumbers that labor constraints in the industry are creating an even greater need for faster installation and set-up,” Maxwell says. “Things like longer venting distances, set-up guides, plain-English controls and accessibility within the cabinet all come together to shave valuable time off of the install.”

So where does the hydronic heating market go from here? According to Avron, it’s all about product development and keeping pace with the consumer demand for connectivity.

“We’ve got products in development right now that will have built-in connectivity that will help the homeowner in making sure the boiler is efficient,” Avron continues. “If there are problems, if they’re without heat or hot water, then they get notification immediately, and don’t have to wait until they get home to find out that the house is cold. It allows manufacturer and contractor to remotely look at the homeowner’s boiler and help troubleshoot it before arriving on the scene. Those type of things are going to help promote the industry, as we can stay relevant there.”

The other thing that will help promote growth is the increased integration of hybrid hydronic systems, Avron adds.

“Heat pumps have been in North America for a lot of years, and traditionally, they’ve been found in Southern states where they could provide air conditioning year-round and heating in the shoulder seasons. In Northern states, heat pumps really couldn’t provide enough heat because of the colder climate. But the technology has improved over the years, and heat pumps can provide a vast majority of heating even in colder climates, but they still need supplementing. So for those in the Northeast or Midwest can now supplement a heat pump system with a boiler or combi boiler. Those types of things are going to help promote the hydronic industry, just in keeping up with technology and being able to integrate with new technologies that are coming on to the market as well.”

“The movement is called electrification,” he says. “So now, we’re looking at products like air-to-water heat pumps. It’s a new world. We’re looking at how they can be made easy to install, service, understand and troubleshoot. Make that technology accessible to somebody so they don’t resist it. That to me is going to be the biggest trend over the next five to 10 years. It’s going to be one of those things that if it happens, it will be a utility here, a utility there, and then, boom! It’s going to be an avalanche. So as an industry, we have got to be ready for that.”