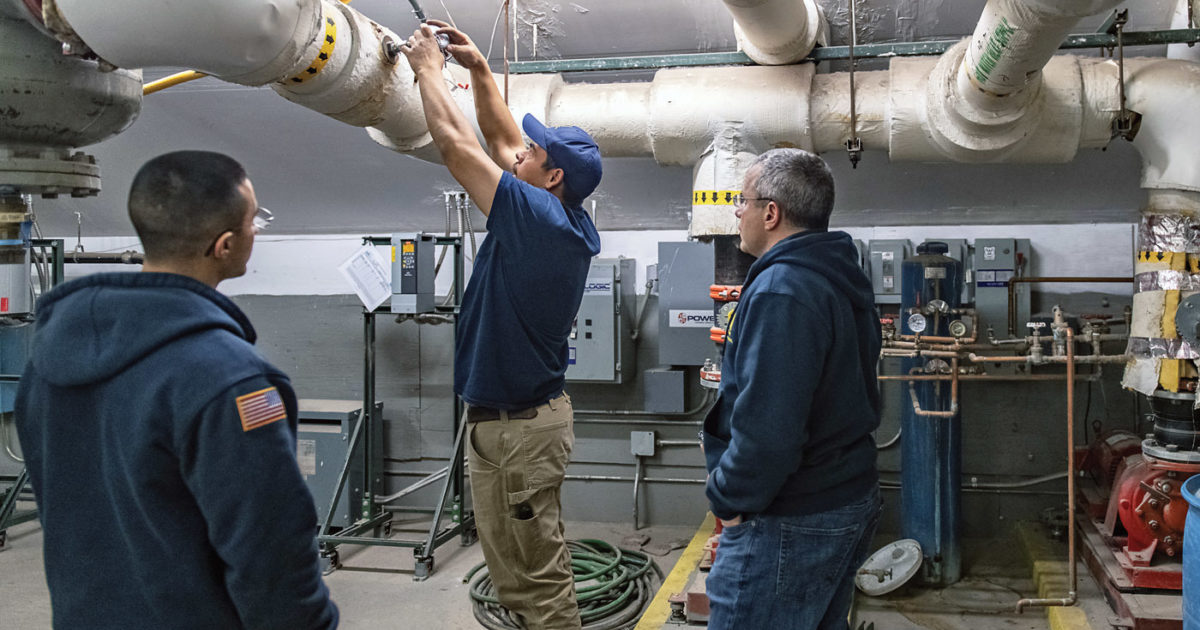 But owner Jim Harper candidly admits it almost didn’t turn out that way. Much of the growth at the company, established in 2000, didn’t occur until the last five years or so. Before that, Harper, 50, endured an uncomfortable chair in the proverbial School of Hard Knocks.

The company’s rocky journey to success illustrates the value of investing in revenue- and productivity-enhancing equipment, establishing a diverse range of services, getting advice from business consultants and charging rates that are high enough for a company to thrive, not just survive.

It also reflects the importance of continual self-education about the business of business, Harper adds, noting that many plumbers are great craftsmen who lack fundamental business skills. Being too busy to read and learn is no excuse, either.

“You just have to make the time to read business books and magazines,” he says. “You can’t ever stop learning.”

Today the company offers plumbing, heating and drain/sewer cleaning services to customers in small towns in central Colorado’s Vail Valley, primarily along the Interstate 70 corridor between Glenwood Springs and Silverthorne.

Being an avid reader led Harper to his first major technology investment that, in turn, led the company to diversify by offering more and more services. It started in 2008 when Harper picked up a copy of Cleaner magazine and read an article about water jetters.

That led to a significant financial investment in a 4025 dual-reel trailer jetter built by US Jetting (4,000 psi at 25 gpm). “I saw it as a key way to build the service side of my business,” he says. “And it did. A lot.”

In a “one thing leads to another” scenario, the company then invested in a Vactor 2100 combination vacuum truck about two years later. It features a 12-cubic-yard debris tank, 1,500-gallon water tank, three-stage fan and hydroexcavation package.

“I thought it would be a way to do even more jetting because when someone hires you to do jetting, they most likely need vacuuming service and vice versa,” he explains. “And there were a lot of guys around here at the time who had jetters, but they didn’t have vac trucks.

“The bottom line is I like to learn about and try different things that are profitable.”

The company also owns a truck-mounted 4050 trailer jetter (5,000 psi at up to 18 gpm) made by US Jetting and an Ultimate Urban Warrior truck-mounted jetter (4,000 psi at 21 gpm) developed by the Netherlands-based RIONED in conjunction with Spartan Tool.

As further evidence of its diversified business base, the company also does a limited amount of commercial septic tank pumping. The company owns a 2001 Kenworth T800 outfitted with a 3,600-gallon debris tank built by KeeVac Industries, a 400-gallon water tank and a Masport pump.

THE PRICE IS RIGHT

Along with building up a roster of equipment and developing diverse services, Harper also learned how to better handle the financial end of the business. That included charging appropriately for his company’s services and collecting payments from vendors in timely fashion.

“You think you know what your work is worth, but in many case, you’re just making it up,” Harper says. “I just went with an hourly rate that other companies were charging in the area. That didn’t work very well. I was spinning my wheels financially for years.

“You have to know the true costs of doing business,” he emphasizes. “I had to educate myself about the right amount of money to charge along with developing systems to govern how technicians work and behave.”

Where did Harper’s education come from? He paid for consultants like Ellen Rohr and Appleseed Business (now called The 7-Power Contractor). He also joined professional groups such as Service Roundtable, which provides resources for contractors to develop best business practices.

Harper also learned a valuable lesson in faster collection of accounts receivable. “I was surviving, but I wasn’t staying on top of accounts receivable,” he says. “I owed suppliers a ton of money but didn’t have enough to pay them because I wasn’t collecting money fast enough from customers. You have to make that a priority.”

The company lost some customers when it imposed stricter payment deadlines. “You have to be prepared for that,” he warns. But when combined with the application of other solid business principles, it all worked toward making the company more profitable, he says.

“A lot of what we changed centered on commonsense solutions,” he points out. “But you don’t know what you don’t know, right? Once I got right things in the right places, business really took off.”

When customers call, dispatchers are trained to ask how they heard about the company. The top answer: The company’s eye-catching dark-blue service vehicles with bright-yellow trim. The company buys blue trucks and has a local company letter them, Harper says.

The blue-and-yellow color scheme is integrated into all levels of company operations, from technicians’ uniforms to invoices and business cards. Even the company’s radio ads end with a tag line that says, “Call the guys in the blue vans.”

“If you’re not building a brand, you’re wasting your time,” Harper says.

Developing a solid business base is even more critical in Harper’s mind because the company’s service area consists largely of small ski-resort communities where housing is extremely expensive. Rent for a two-bedroom apartment, for instance, can run as high as $2,300 a month and even a small home costs $600,000 to $900,000.

As a result, he feels compelled to do whatever he can to generate the kind of revenue needed to pay technicians wages sufficient enough to support a decent lifestyle. “Guys who are always worried about how they’re going to pay for housing aren’t going to be great technicians,” he says.

Looking back, Harper says he never in his wildest dreams expected his company to grow so big. “All I wanted was to build a decent-size company — one that can provide for my family, make a good living and allow me to hire a great bunch of people and do awesome work. And now I’m getting there. It just took a little longer than I expected.”

Looking to the future, Harper plans to expand the company’s service area farther east and west. One reason: Business has reached a local saturation point. “You’re only able to get so many customers in a given area,” he says. “We’re never going to be the be-all and end-all for everybody in our core service area, so it makes sense to expand and cover more territory.”

The company already has opened a new office in Silverthorne, roughly 35 miles east of Edwards along I-70. Geographic expansion also will provide the company with access to more technicians, as well as more opportunities for technicians to live and work in more affordable areas, Harper adds.

“It’s too hard to ask guys to commute in this area,” he says.

As for financial goals, Harper aims to double the company’s revenue by 2025. He knows that’s an ambitious goal but says he’s inspired after reading What It Takes: Lessons in the Pursuit of Excellence by Stephen A. Schwarzman, the chairman, chief executive officer and co-founder of The Blackstone Group, a global private equity giant.

“In the book, Schwarzman says big goals and smallgoals all take the same amount of commitment, so why not have big goals? I love that philosophy,” he says. “Why not play a bigger game?

“I love a good challenge,” he concludes. “I figure I’m only coming through here one time, so I want to leave it all on the table.”