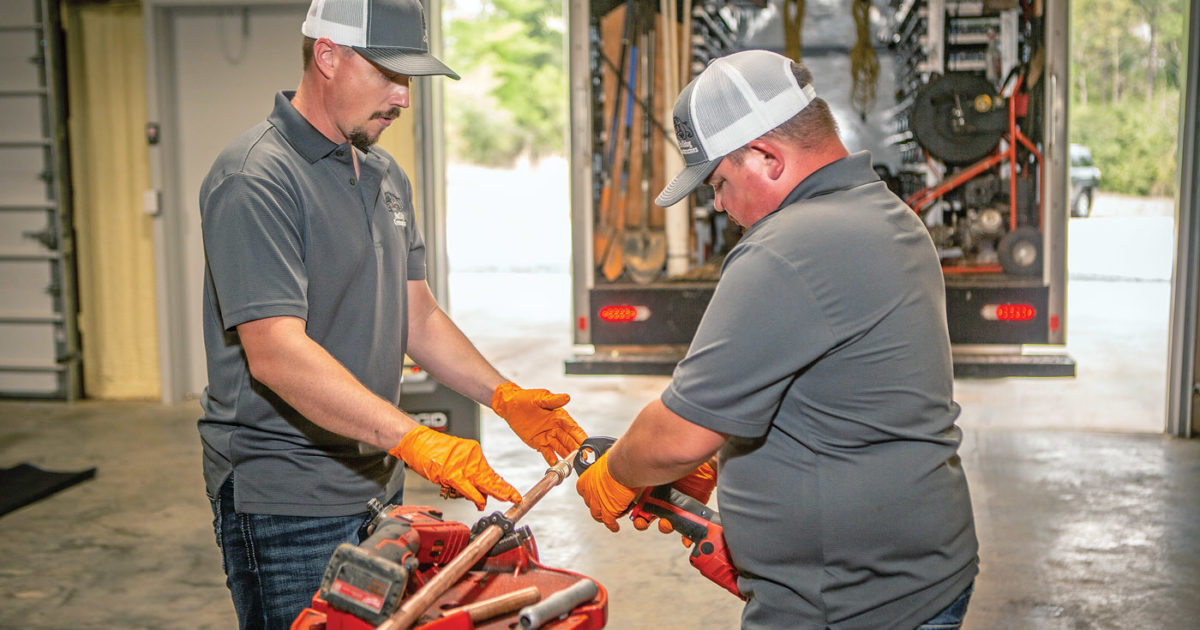 For more than 40 years, Bulldog Contractors in Jefferson, Texas, has relied on a simple formula for success: Adapt to changing market conditions, invest in advanced technologies, provide great customer service and build a diversified business that’s a one-stop shop for customers.

The company’s transition decades ago from a residential-remodeling general contractor to a plumbing firm reflects its ability to change with the times. Owner Carl Keller, who established the East Texas company in 1978, made the switch to survive, not by choice. But it turned out to be a fortuitous move for both Keller, who’s semiretired and still owns the company, and his son, Jeff Keller, who now runs it.

The change was prompted by small-town politics, as local plumbers preferred to work for other general contractors in town instead of Bulldog. “They didn’t want us to get business, so they priced our jobs so high that we couldn’t compete as a general contractor,” Jeff says.

Undaunted, Carl fought back by getting a plumber’s license in the early 1990s. That enabled him to do plumbing work himself. The strategy worked so well that the company eventually morphed into a plumbing business.

“We eventually got so overloaded and crazy busy with service work that we dropped the remodeling and went into full-blown plumbing and drain cleaning work,” says Jeff, age 32. “Business was great, and the profit margins were much better than remodeling work, too.”

Plumbing services currently generate about 65% of the company’s revenue, while septic-related services contribute the rest, he says.

PUMPING IN THE MIX, TOO

Around the same time the company started moving into plumbing work, it also entered the arena for septic tank pumping and septic system service and repairs. The rationale for the move was simple: In rural East Texas, most homes still have septic systems. And if a customer has a plumbing issue, the odds are roughly 50-50 that it’s either a plumbing or septic system issue, Jeff says.

“We wanted to be a one-stop shop for our customers,” he says. “No matter what the problem is, we want to be able to take care of it, right then and there.”

As such, it’s not unusual for Bulldog to send a vacuum truck and a plumbing vehicle to rural job sites, just to avoid making customers wait for service. Jeff charges customers more to bring both vehicles, but he gives them the option of bringing just one truck or both.

“If people tell me it’s been a long time since their tank was pumped, I can pretty much predict what the problem is,” he says. “We usually take both trucks with us so we don’t have to backtrack and cost customers time.

“If they haven’t had the tank pumped in, say, 10 years or more, they’re going to need that done anyway,” he continues. “I usually try to pump the tank first, and if that doesn’t fix the problem, then we’ve got a plumbing truck parked right there.”

Jeff is manufacturer-certified to repair and service 13 different kinds of aerobic systems. On the rare occasion that the company installs a new septic system, Jeff says he prefers Clearstream Wastewater Systems, using either concrete or fiberglass tanks supplies by Clearstream, he says.

Fixing a variety of plumbing and septic issues, from neglected septic tanks to clogged drains, requires a stable of reliable equipment. Bulldog has built a reputation for having the right machine for the job, which Jeff says is necessary to provide great customer service.

“The industry is constantly changing,” he points out. “If you don’t adapt and change with the way it’s evolving — and the plumbing industry is exploding with new innovation — then you’re going to be left behind, plain and simple. We try to keep up with most innovative tools and technology.”

On the septic side of the business, the company relies on a 1996 International truck outfitted with a 1,650-gallon steel tank made by Lely Tank & Waste Solutions and a vacuum pump made by National Vacuum Equipment.

To do repairs and system installations (the company only installs a handful of new septic systems a year), as well as replace waterlines and sewer lines, the company also owns a JCB backhoe, a trencher made by Ditch Witch and a 35-foot flatbed trailer made by McLendon Trailers.

For plumbing, the company owns a 2017 Chevrolet Express cutaway van with a 12-foot box body made by Supreme (a company owned by Wabash National) and storage and shelving units built by Hackney. The company also relies on power tools made by RIDGID and Milwaukee Tool.

In addition, the company owns a RIDGID K-6200 drum machine (for 3- to 6-inch-diameter pipes) and an M18 Drain Snake manufactured by Milwaukee Tool.

How is Bulldog able to afford so much equipment? By charging prices that are high enough to cover overhead costs, as well as generate sufficient profit margins that enable the company to keep reinvesting in more tools and equipment that boost efficiency and productivity.

A good example is pipeline inspection cameras, which Jeff says are among the smartest purchases he’s ever made. The main benefit: The ability to see and diagnose problems without tearing up customers’ yards to find the problem, he notes.

The cameras make company technicians look more professional and help sell jobs because customers can actually see a problem. To recover the cost of expensive video equipment, Jeff charges an add-on fee to camera lines. As he puts it, “There’s nothing free in this world.”

But he only offers it as an option, and Jeff gives customers a free one-year warranty on work if a post-cleaning camera inspection shows a line is running free and clear and the pipeline system is in good working order, he adds.

But in the end, it’s hard to make equipment investments by charging just below or about what competitors charge. “I charge based on what a job is worth and how long it’ll take me to finish it,” he says.

One way Jeff stays on top of plumbing innovations is through a Facebook group called Plumbing Hacks and Plumbing Professional Discussions. When Jeff first joined the closed group (wannabes need to apply for membership), it consisted of 300 to 400 plumbers. Now it has just under 33,000 members and has expanded to include not only licensed plumbers, but also product manufacturers and industry representatives, Jeff says.

“Its goal is to educate and uplift the trade,” says Jeff, who has served as a moderator for the Facebook page. “I’ve learned a lot of things over the years, from marketing tips to new products, and met a lot of great people. There’s a real sense of camaraderie here.

“Everyone learns from the group and implements tips and knowledge gained into their own businesses,” he continues. “There’s so much knowledge that’s literally priceless. I hate other kinds of social media, but this is an awesome networking tool.”

While investments in advanced technology helps provide great customer service, it’s not the only factor in gaining repeat business. Jeff says Bulldog technicians strive to treat customers and their homes they way they’d want to be treated.

“When customers call, they’re putting all their trust and faith in your company,” Jeff says. “They’re trusting you with a major investment in their property, whether it’s a plumbing system or septic system.”

As an example of a little thing that pays big customer-service dividends, Jeff says the company provides customers with a series of arrival windows, which gradually get narrower as the appointment draws near. During an initial call, for instance, a customer might be told to expect a technician between, say, 8 and 10 a.m., Jeff explains.

But the day before the service call, the customer gets another call to make sure the time still works — and to narrow down the arrival window to between 30 minutes and an hour. “That’s because by then I have a better idea of how things will shake out,” he says.

On the morning of the call, a technician will call ahead and narrow that arrival window even further, usually down to 10 or 15 minutes. “It’s all about efficiency — not wasting your customers’ time and also keeping them happy,” he says.

Jeff says customer service is always top of mind, especially since the company often gets calls from customers who are disgruntled about the service provided by the last plumber they used. Moreover, he also notes that most service calls come from word-of-mouth referrals, which reduce the need for expensive marketing campaigns.

Educating customers also helps spur repeat business, especially on the septic side of the company. Customer education also helps with price objections, because when customers understand everything that goes into a job, they better understand the costs involved, he adds.

Looking ahead, Jeff says he will eventually buy the company from his father. But that won’t change the company’s less-is-more business strategy, which prompted a gradual downsizing during the last 10 years. Growing smaller instead of larger allowed the company to operate at a saner pace and pay even more attention to customer service, he says.

“I’m not looking for the headaches that come from more growth,” he says. “There was a time when I was married to the business, with no life and no family time. But now I place more value on time with my family and friends and spending time doing things I want to do. And that’s the way it’s going to stay.”