On the Road to Practically Perfect Plumbing 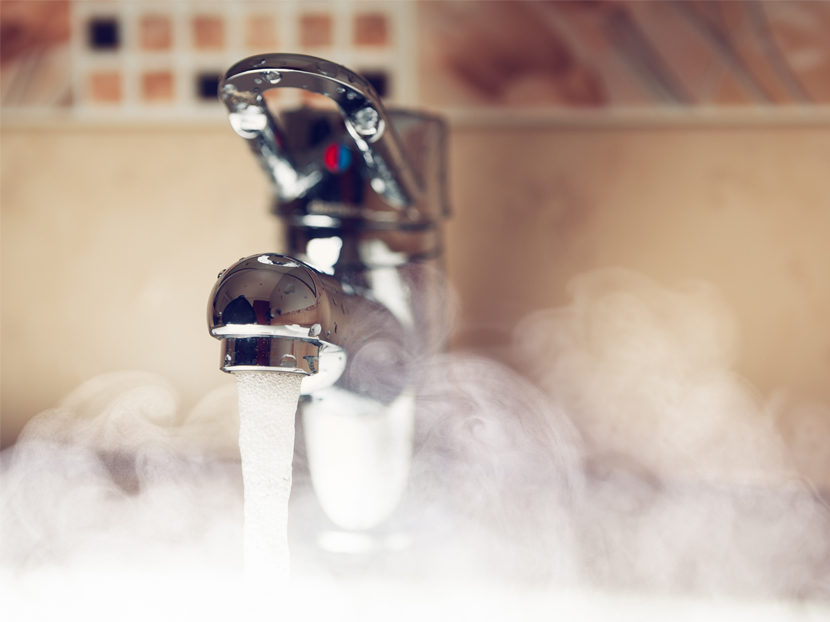 In our last article, we dealt with what hot water users really want, and could expect, from their hot water system – if it was designed properly.  Namely, we argue, fast arrival of domestic hot water – short time to tap values.  Not only will the user be happier, but less heat and less water will be wasted.  What’s not to like?  We also explained the mixing front phenomenon that slows the arrival of the truly hot water, whether starting from a water heater or from a trunk line that’s kept hot by a recirculation system.  We also touched on the pressure penalties paid when we shrink the size of the pipe in an effort to get hot water to the tap fast.

This article pulls the two competing aspects of hot water delivery together. In our quest to minimize the wait time for hot water and also minimize the waste of water and energy, a ⅜-inch tubing “twig” to the fixture  (trunk, branch, twig – get it?) is an attractive option. And, it’s inexpensive to install. But, there’s a price to be paid when pipes get smaller. If the twig is too long and/or the fixture too greedy (causing high fluid velocity and friction), excess pressure drop rears its ugly head.

For the Solara NetZero multifamily project in upstate New York, we chose ⅜-inch PEX twigs with care. We estimated the maximum twig lengths and fixture flow rates and then consulted published tables for pressure loss for ⅜-inch PEX tubing and used them to estimate pressure loss and arrival times. We then installed a crude but effective test setup on site to confirm at least the pressure drop estimates. At the time, Pete believed that “plug flow” was a reasonable method to estimate arrival times. Assuming plug flow and a 1.5 gpm shower flow rate, in ⅜-inch PEX tubing, the math told us that hot water would arrive in about six seconds; well below our arrival time goal of 10-15 seconds. The risk of excess pressure loss seemed to be a more pressing problem.

There were a range of fixture flow rates in the building. The showerheads were rated at 1.5 gpm (at 80 psi – Solara only offered 40-45 psi). The actual flow rate in the hot water twig is less than 1.5 gpm because cold dilutes the hot to create the mix. The proportion depends on the temperatures of the hot and cold water as they enter the shower valve and on the target mix temperature. For example, if the hot water is coming into the valve at 120F and the cold at 60F, for a mix temperature of 105F, the proportions of the mixed flow rate are 75 percent hot and 25 percent cold.

Kitchen sink faucet flows were estimated to be around 1 gpm and the lavatory sink faucet flows were even lower.  The longest twigs in the building are about 30 feet long. Most of the twigs are considerably shorter than this length, but we wanted to make sure that even the longer twigs would serve their fixture activity without causing wimpy spray (showerhead) or flaccid stream (faucet) patterns.

Our test setup at Solara was pretty simple. Just in advance of the test twig we connected a 12 inch long copper tube, which was needed to support the Fluxus F601 ultrasonic flowmeter sensor pair, a cold and hot bypass assembly (to facilitate cold water refreshment of the twig) and a pressure gauge. The end of the twig featured a boiler drain and second pressure gage. After refreshing the twig with cold water, we would change the bypass valves to “hot” and open the boiler drain to various positions to allow hot water to flow through the twig (mimicking what happens when a fixture is opened for a cold start in real life). We would open the valve at various positions, record the flow rate (between 0.75 and 2.5 gpm) and the resultant pressure drop between the gauges. We also recorded the time of arrival of hot water with our sensitive hands. (At the time, we didn’t know that Gary was already preparing to do just this on the other side of America with an ingenious and elegantly instrumented setup.)

Figure 1 illustrates the interplay of pressure drop and arrival time at different water flows based on data we derived from the testing. You can see that as flow rate increased, so did the pressure drop – no surprise (red solid line on the graph). The pressure drop was about 12 psi at a flow rate of 1.7 gpm and 4.4 psi at 1 gpm, etc. Adequate pressure driven flow through the shower valve was the most important goal, especially with a starting pressure of only 40 psi in the trunk line back in the mechanical room (the municipality offers low pressures at Solara). The pressure drop at flow rates between 1.2 and 1.5 gpm (the flow range for the hot twigs during a shower) weren’t large. So, no problem, right?

[Figure 1. The Tension Between Velocity and Pressure Drop]

Getting the hot water to the fixture – time to tap – was also important and Figure 1 shows that 30 foot and shorter ⅜-inch PEX twigs get this job done admirably. The dashed line on this graph shows that at 1 gpm, hot water appeared at the fixture in about nine seconds and at 1.5 gpm in about six seconds. Gary and I have done more elegant testing that shows time to tap in much more detail.

Pete repeated this test recently with a fast acting thermometer and described the time to tap temperature pattern for ½-inch PEX 42 feet long. Bottom line: the tenant has to wait about 14 seconds for the hot water to show up and maybe 10 more seconds to experience 110 degrees.  A 30 foot long (or less) and ⅜-inch diameter twig would be substantially shorter.

Just before the tenants moved in, however, the contractor tested the showers and noted that the spray pattern was too wimpy. Since time was short, his simple solution was to take the pressure compensating disks out of the showerheads. And later to express concern that the problem originated with the ⅜-inch twigs. Without the disks, the shower heads were now unobstructed and reverted to being purely pressure-dependent; the spray pattern improved but at a cost: the showerhead flows in the apartments now exceeded 2 gpm, busting our hot water thermal budget which was based on a maximum of 1.5 gpm.

Post construction on-site flow rate and pressure loss measurements in the PEX trunk lines upstream of the shower twigs confirmed that at worst case conditions, pressures of about 40 psig would be available at the twig manifolds serving the apartments on the second floor.  This level of pressure suggested satisfactory shower performance.  Since the showerheads in the trim set contained a pressure compensating disk that is designed to afford reasonable flows out of the head at fairly low pressures (see our previous Plumbing Engineer article that showed how these disks extend showerhead performance at low pressures), and because of the relatively small pressure drop that we measured in the pipe experiments, we concluded that a 30-foot ⅜-inch  twig would achieve both an excellent delivery time and supposedly, meet the showerhead performance goals that we expected.

So, what stole the pressure at the showerheads? To get to the bottom of this, we delved deeper. To our surprise, the spec’d shower valve bodies featured a small diameter shower feed bypass channel drilled in the back of the brass body that more than doubled the twig pressure losses. (See our fourth Plumbing Engineer article in this series.)

Our recent tests of shower valves found in comparably priced trim sets from other companies shows that several manufacturers offer valve designs with up to half the pressure drop at the same flow rates. (More on that in our next Plumbing Engineer article.)

There’s some good news, however. We were able to re-install better adapted pressure compensating disks in one of the four buildings before the tenants moved in. Doing so produced an average shower flow rate around 1.6+ gpm. Thankfully, it all worked out. We’ve received no complaints about the showers from any of the buildings, with or without the disks.

Going forward, we have been able to address two of the three issues we found in Solara Phase 1. In the Phase 2 buildings under construction: a) the twigs will be shorter, and b) we hope that installation of a new pulsating showerhead (with a pressure compensating disk) that delivers an excellent spray pattern at low spigot pressures will solve the wimpy spray pattern problem.  The same shower valves are still being used; we haven’t won that battle yet!