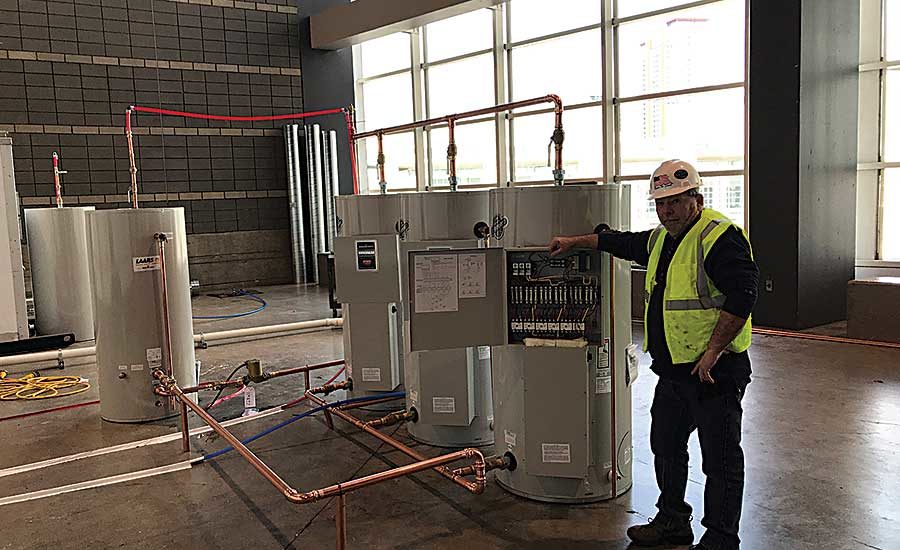 Around the country, the U.S. Army Corps of Engineers has been rapidly assessing and building alternate care facilities to alleviate strain on local hospitals during the COVID-19 pandemic.

While most of these facilities are being designed to handle non-COVID-19 patients, McCormick Place convention center in Chicago was set up to treat up to 3,000 low to moderate coronavirus patients, thereby freeing up hospital beds for more severe cases.

Construction of the first 500 beds was completed April 3, while the rest of the field hospital was expected to be finished by April 24, noted Walsh Construction, the firm leading the temporary conversion of the facility.

Friedman & Dorrans offers technical and installation support, employing a few former mechanical contractors who are familiar with the products they represent. O’Sullivan Plumbing had reached out to Ferguson Enterprises for help, which in turn, reached out to Ford.

“With the first 500 beds, we had come up with a solution for their hot water issues by supplying the heaters and the storage tank for the staff showers and another heater for the AVA showers,” Ford said.

Friedman located enough water heaters at one of Bradford White’s consigned inventory warehouses in Atlanta. The heaters, he noted, were delivered within 17 hours of ordering. In addition to the water heaters, Friedman also required conversion kits, which were flown next-day air from Bradford White’s Middleville, Michigan manufacturing facility.

“To watch representatives from every trade standing in a circle with a FEMA representative and construction managers coordinating efforts — then it was like, ‘Ready! Break! Let’s all go get our jobs done!’” Ford said. “Then, we would reconnect again in about five hours and reassess. It really was an impressive thing to be part of.”

Ferguson Director of Commercial — Central Midwest Jim Kuenn didn’t know what to expect when the call came in for assistance on the project.

“It was a daunting task that most of our associates had not seen before,” he said. “We said yes because we wanted to not only help our customer, but also the community during this time of need.”

“Hot water is critical for cleaning, sanitizing and hygienic purposes, and it’s important for us to do our part to support the healthcare workers on the front lines,” Taylor said.