Why Every Home Should Be a Thermal Battery 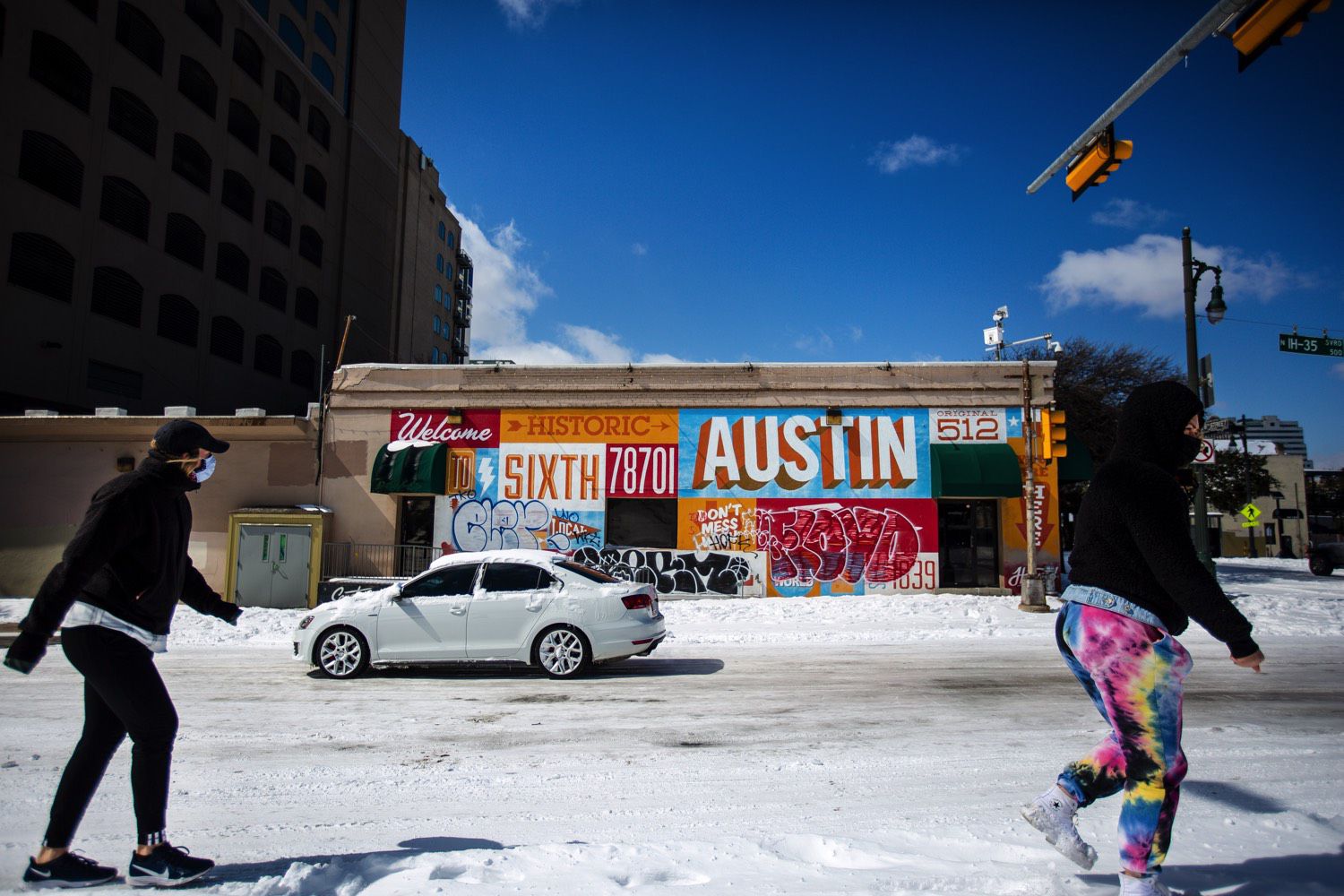 On February 15th it was colder in Austin, Texas than it was in Toronto, Canada. The photo above could actually be mistaken for Toronto if not for the sign. In Houston, as this is being written, 1.3 million people are without power, and nobody has any idea when it is coming back. The governor says "Many power companies have been unable to generate power, whether it’s from coal, natural gas, or wind power. ” The water supply system in Houston is in danger of failing as people leave taps on to keep lines from freezing.

Of course, a lot of people are showing photos of frozen wind turbines and blaming reliance on renewables, but according to Will Wade in Bloomberg, "While ice has forced some turbines to shut down just as a brutal cold wave drives record electricity demand, wind only comprises 25% of the state’s energy mix this time of year. The majority of outages overnight were plants fueled by natural gas, coal and nuclear, which together make up more than two-thirds of power generation during winter."

Every time there is a crisis like this, we roll out the same answer and make the case for resilient design. It's one of the reasons that we are so fond of super-insulated Passive House designs; they act like thermal batteries, keeping the heat in, or out, for days.

As Alex Wilson wrote almost a decade ago in Making the Case for Resilient Design, the same ideas we preach for reducing carbon emissions also protect us in times like this.

In Texas, as in most crises, the electrical and gas supply cannot keep up with the increased demand, and everyone is talking about the problems with the supply side. However, in the longer term, we have to talk about reducing demand. In 2020 the Rocky Mountain Institute (RMI) released A Framework for Considering Resilience in Building Envelope Design and Construction where they discussed a new metric, "hours of safety," or "how long a home can maintain thresholds of comfort and safety before reaching unsafe indoor temperature levels. This is especially important in considering the health and safety of vulnerable populations as extreme weather events increase in frequency."

They calculated that a typical 1950s home would take eight hours to drop below 40 F in a power failure, while a code-compliant home would take 45 hours, and a Passive House would take 152 hours. (A net-zero ready home, a standard touted instead of Passive House, only lasted 61 hours). While these calculations were done for Duluth, Minnesota, it should be noted also that for a Texas environment, Passive House keeps the heat out as well as keeping it in. RMI notes that "while this research simulated a power outage during a cold-weather event, hours of safety is relevant to heatwaves as well."

In principle, anything that is done to insulate or seal a home works hot or cold. "Weatherization efforts such as air sealing, increasing insulation, and installing storm windows can help extend the amount of time a building maintains safe indoor temperatures."

The RMI graph is a simulation, but this is the real thing from the 2014 polar vortex, showing the drop in temperature in a townhouse renovated to Passive House standards in Brooklyn, where the temperature outside dropped like a stone but inside, it was days before they even bothered turning on the heat. I noted then that "We are living in a time when the engineers can't keep up with the changes that are happening around us. Meanwhile, power and gas supply grids are becoming unreliable under the pressure of these changes."

Remember Hurricane Harvey? Matt Hickman wrote at the time that rebuilding should be stronger, higher, smarter. Like everything in Texas, the problem is bigger. Texas gets a lot of weather, from hurricanes to heat waves to floods to droughts, and now this.

If there were any state in the USA that should have tough standards for resilience, it should be Texas.

We have been saying this so often, and for so long; I wrote in a previous post on lessons from a polar vortex:

Coincidentally, on the day that the storm hit Texas, British architect Mark Siddall issued a challenge to owners of homes designed to Passive House standards. (He means 2021.) "Each day, if you post about the inside and outside temperature, the behaviour of the house and how you feel we get insight." In a Passive House, turning off the heat is a game, not a disaster.