What Is Passive House? 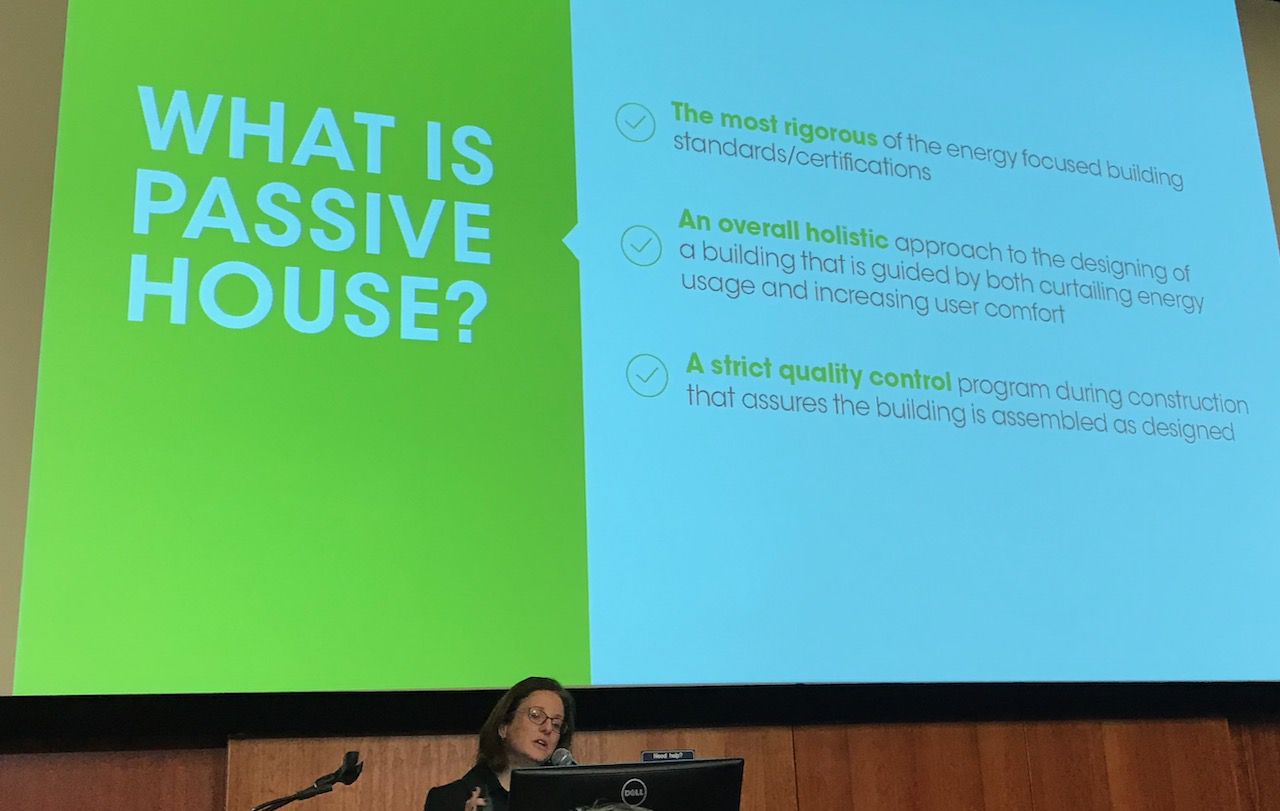 We have never actually explained this in one post on TreeHugger. I am going to try.

At the opening keynote presentation of thePassiveHouse Canada conference recently, I rolled my eyes when Deborah Moelis of Handel Architects put up a slide asking, "What is Passive House?" in front of an entire room full of Passive House engineers, architects and builders. But in fact, it got me thinking that Julie Andrews was right – starting at the very beginning is a very good place to start. I searched TreeHugger's archives and realized that we have never done a post that actually did a real explainer.

Over on Passive House Accelerator, a website that promotes the concept of Passive House, architect Michael Ingui first describes its benefits, noting that a Passive House:

His firm,Baxt Ingui, primarily does residential Passive House designs in New York City, so his more detailed explanation relates more closely to single family residential, but the five principles are universal to any kind of building:

The walls, roof and floor have way higher R-values than conventional buildings, to keep heat in during cold weather and out during hot. (The prefab wall panel in the photo has 12 inches of cellulose insulation.) There is so much insulation that the house needs very little heat in winter and can go for days without any additional heat at all. The amount of insulation varies according to local climate and the design of the building to hit a specified energy target.

Passive House quality window in Seattle/ Lloyd Alter/CC BY 2.0 They are often triple-glazed, and they seal up to be completely air-tight, with carefully designed frames so that there are no cold spots or thermal bridges. I love looking at them cut open at shows; they are complex and beautiful things. Traditionally, they have been far more expensive than conventional windows, but they are rapidly coming down in price to where Ingui says they now can cost the same as typical windows.

Lloyd Alter/ note the shadows on the windows and building/CC BY 2.0

The windows have to be carefully sized and placed to account for solar heat gain, which is accounted for as a source of renewable energy. But you can have too much of a good thing, so shading is also taken into account to ensure that you don't overheat.

It is remarkable and shocking how much our houses and buildings leak; add up all the little ones and, according to the US Department of Energy, "The average home has enough air leakage to add up to a two-foot-square hole. This is like leaving a medium-sized window wide open 24 hours a day." There's not much point in all that insulation if you are leaving the window open, so air tightness is critically important. It's achieved with good design, skilled execution, and post-construction testing. So you see things like smart Intello air and moisture barriers, with furring inside to create a space for wiring so that there is no chance of putting a hole in it.

Ben with HRV in Garage/ Lloyd Alter/CC BY 2.0 The wind blows right through my hundred-year-old house with lousy windows and leaky walls, so I never worry about fresh air. Passive House designs have opening windows, but when the windows are closed, there is not much leakage through the walls or windows, so it needs managed and controlled ventilation. The air that is exhausted has to be replaced, and a heat recovery ventilator minimizes the heat loss or gain caused by the air changing. High quality filters ensure that the air is clean.

Combined with the airtight construction and quality windows, this ensures that all the air you are breathing is controlled and fresh, not sneaking in under the doors or through holes in the wall.

This is the toughest one for people to understand, particularly architects. See those balconies? They are massive thermal bridges, radiator fins, transferring heat energy from inside to outside. They make the inside uncomfortable, make conditions great for mold growth, and cost a fortune. Balconies are the Golden Gate of thermal bridges, and the building in the photo is probably 60 years old, but architects are still allowed to do this (here is a famous and controversial example); their impact is not sufficiently understood or they just don't think they are worth worrying about. But there are little ones everywhere in buildings, every jog and corner and push-out that isn't detailed properly. Passive House demands that every one be calculated and accounted for.

All of these data are put into a giant spreadsheet that tells you if the design meets the standard for energy consumption per unit area. That also becomes a good checklist for ensuring that it hits the targets.

It's not really all that complicated, but it's hard. It puts limits on what the designer can do; it is all push and pull. Want a bigger window here? Add more insulation there. Want a jog or bump-out or gable there? Lose a window here. A lot of architects don't like these limits and design compromises, so when you hear one say, "Passive House inspired," run away. It is a standard that has to be met, not a guideline or a checklist. You are or you aren't.

But if it meets the standard, a Passive House building will be cheaper to operate, far quieter and more comfortable to be in, and will keep you warmer or cooler longer when the power goes out. It's tough, but it's worth it. Frankly, if we are going to do anything about this climate crisis we are in, it should be the minimum acceptable standard. Really, Passive House is Climate Action.

It is important also to note, as Passive House expert Monte Paulsen does, that Passive House is not enough. How you get there matters, and the materials matter; they should all be healthy and the upfront carbon emissions from making them matter. We also have to plan ahead for adaptation to climate change.

If you're looking for more information you can look at Passive House Plus, a magazine published in Ireland and the UK, The North American Passive House Network which "supports the widespread adoption of the international Passive House design and construction standards," or if you are in the USA and into American Exceptionalism, there is the Passive House US or PHIUS version that uses different criteria. Both PHI and PHIUS are used in the USA, and as Paula Melton of BuildingGreen notes, "The two Passive House standards are quite different once you get into the details, but in the end, they both promote the same thing: minimal energy use."

Here is a short video by Hans-Jörn Eich that explains Passive House in 90 seconds, and there is also the very entertaining but, vaguely NSFW, French video as well.