Why Are We So Reliant on Air Conditioning? (It's Not Just Climate Change, It's Bad Design) 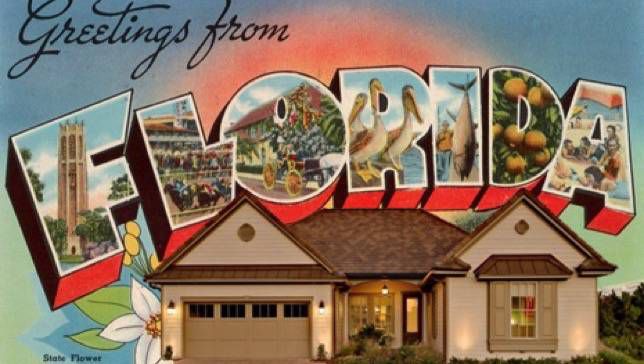 Greetings from Florida, where in 2011, Martha Stewart contributed to the design of houses for a subdivision in Orlando. If I hadn’t Photoshopped it onto a postcard, you might not know where it was, because house design has become totally disconnected from climate and location. (This house looks sorta colonial to me, though you never can tell these days.)

Today, houses pretty much look the same wherever you go in North America, and one thing made this possible: central air conditioning. Now, the United States uses more energy for air conditioning than 1 billion people in Africa use for everything.

We have reaped huge benefits from air conditioning, made vast areas of the United States habitable and comfortable. But as professor Cameron Tonkinwise of Carnegie Mellon School of Design has noted, “The air conditioner allows architects to be lazy. We don't have to think about making a building work, because you can just buy a box.” And we have forgotten how to make a building work.

Architects used to know what Victor Olgyay taught us in his book "Designing with Climate," that comfort is a function of temperature, humidity and air movement. Have a good breeze and low humidity and you can be comfortable at a high temperature. I love this drawing of the guy with a pipe in a modernist chair (see the kidney-shaped grey area) that's just right. Olgyay showed us that if conditions were properly managed, we could be happy and comfortable in a zone of temperatures. However today's architects and mechanical engineers don't think that way. As professor Terri Boake of the University of Waterloo puts it, they demand a "finite point of expected comfort for 100 percent mechanical heating and cooling."

Our ancestors knew this; look at this window from the Jessup House in Westport, Connecticut. It’s incredibly sophisticated; you can tune double-hung windows to get maximum convection and ventilation by adjusting the top and bottom. There are shutters for privacy and security, also interior sheer blinds for privacy or to cut glare. There is an overhanging cornice to keep the rain off. This is smart stuff. Inside there will be cross-ventilation in every room, with windows in halls and bathrooms for lighting and air. In winter, there will be heavy drapes for insulation.

Houses were designed so that people could take advantage of breezes. Florida houses were often built on stilts, high up to catch the breeze (and avoid the creatures crawling below). There might be high clerestory windows to let out the heat. These were established practices, as described by Dorinda K.M. Blackey:

Back in Florida at Martha’s house, only the master bedroom has the possibility of cross ventilation; all the other bedrooms are dinky with one window. Some rooms have no window at all. With the exception of the covered rear porch that makes some concession to climate, the house could be anywhere. Note how the front hall is filled with a dining table; nobody goes outside long enough even to walk from their car to their front door, they come through the garage.

In 2010, I wrote in TreeHugger: If we are going to build a sustainable society it will not be with hydrogen cars or photovoltaic roofs, but through simple, sensible measures like designing our cities and towns so that we don't need cars and our homes so they don't need air conditioning.

I don’t think that's realistic anymore, given that so many people live in the South and Southwest now, places where it is almost impossible to live without air conditioning. Our summers have become hotter, and we have become used to being in a cocoon of cool air as we move from house to car to office. Photovoltaics are getting pretty cheap and good, and Teslas look like fun.

Also, encouraging people to live without air conditioning is less relevant with the increasing popularity of super-insulated homes like the Passive House, which don’t need much air conditioning at all; it doesn’t take much to get them cool and keep it there. All of those jogs and overhangs and windows that I love so much in that house I show above would just compromise a passive house design.

We need a balance between the old and the new, an understanding of how people lived before the thermostat age along with a real understanding of building science. To discover what we have to do to minimize our heating and air conditioning loads and maximize comfort, we have to design our homes right in the first place.