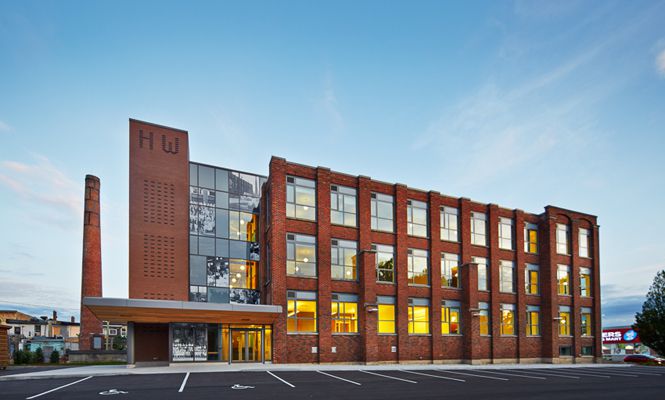 Most of the PassiveHouse projects we show on TreeHugger are pretty splashy and flashy; every design site loves pretty pictures. But around the world, under the radar, projects are being built that show how the PassiveHouse concept is catching on and having a big impact on buildings and the people who live in them. For example, down the road from Toronto in gritty, formerly industrial Hamilton, Ontario, Indwell, a charitable organization has been building housing as "a Christian response to deinstitutionalization" for forty years, providing support for vulnerable adults dealing with mental health issues. And more recently, the housing they have been building has been designed to the tough PassiveHouse standard. This was, for me, the most remarkable slide shown by Graham Cubitt of Indwell, shown at the PassiveHouse Canada presentations at IIDEX in Toronto. It shows the dramatic decline in energy intensity in their buildings, starting on the left with an ordinary Multiple Unit Residential Building (MURB). Every building they do is better than the previous one. As shown on the graph, the Rudy Hulst building didn't get close to the PassiveHouse standard of total energy consumption of 60 KWh/m2/year. Graham Cubitt said that the mechanical system was the problem here. But it demonstrated the progression toward Passive; it also has that look of a PassiveHouse building with a tight budget, where architects have to deal with relatively small windows on a big flat wall, and turn to different colors of cladding to break up the mass. You will be seeing a lot of this. Canadian kids used to wear Harvey Woods socks and underwear; now all the local millineries are bankrupt and their factories demolished or turned into lofts. But this building in Woodstock, Ontario, survived long enough to be turned into affordable housing. According to the architects: It is really hard to get renovations even close to PassiveHouse standard, but again, looking at the graph, this one has pushed the energy consumption down to less than half of code requirements and really, not much above PassiveHouse. That's impressive, and so is the architecture here. Coming soon, however, is 500 James Street North. Most TreeHugger posts about Hamilton over the years have been rather negative, focusing on the City's obsessions with 6-lane one-way streets, killing transit projects and knocking down historic buildings, but lately The Hammer has been on a roll, building the Province'sfirst sorta tall wood building, turning James Street into a two-way street that is now the trendiest strip in town (whenthey are not abusing pedestrians), and now it's getting another tourist attraction, "a contemporary church with a focus on sports ministries along with 45 apartments." I often think ofthis picture of Elon Musk and his vision of The Future We Want with solar roofs on suburban houses with big batteries and two Teslas in the double garage. But look at Hamilton, which is now actually saving buildings, attracting the artists and young people priced out of Toronto, building the controversial transit line, and now, with Indwell and architects Invizij, doing affordable housing at Passivehouse standard. We are actually getting the Future We Need.