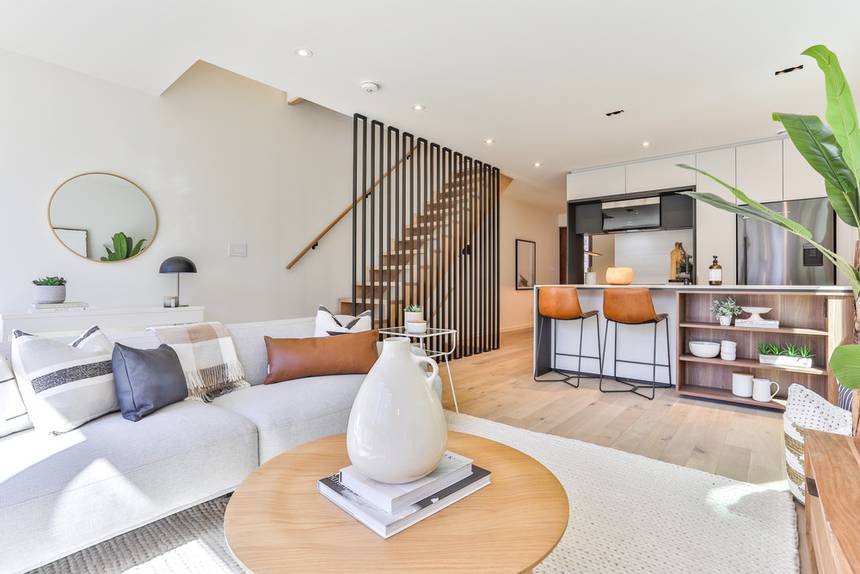 There are lots of reasons we post houses on TreeHugger. Is it increasing urban density? Is it healthy? Is it prefab? Is it all-electric? Is it efficient? It's pretty rare that we see something that hits all of these buttons, But this new project in Toronto by baukultur/ca does. I also hits a bunch of our mantras:

It's an unusual configuration for a two-family house, with one sort of L-shaped unit behind the other, each 4 storeys from basement to attic. I didn't think that a "house behind a house" design was even legal in Toronto. But it is a great idea, and it doesn't look like a two-family house, which probably makes the neighbors happy. You don't get the really narrow units that you do in a semi-detached house, and both houses have access to the front and rear. It's no bigger than many of the infill single-family houses you see in Toronto, either; that's sufficiency , getting enough to live comfortably yet providing two units where there probably used to be one.

The walls are prefabricated by Pinwheel Structures, who can build to Passivhaus specifications, although this house is Net Zero Ready yet another standard, this one being 60 percent more efficient than conventional homes with 80 percent lower carbon emissions. With Pinwheel's wood and cellulose walls, the upfront carbon emissions (UCE) are going to be pretty low as well.

Most of the UCE will be coming from the concrete in the basement, which is pretty hard to avoid in Toronto construction. However, I really like the "if you've got it, flaunt it" approach designer Felix Leicher took in insulating the basement on the outside and leaving the concrete exposed. (I did the same thing in my own Toronto house but used block instead of poured concrete and it looks tacky in comparison)

The houses are also Built Green Platinum, another Canadian standard I have never heard of (why are there so many of these?) which the architects say "focuses on much more than mere energy efficiency but rather looks at the buildings from a holistic standpoint: The House as a System - which encompasses the preservation of natural resources, reduction of pollution, ventilation and air quality, and the enhancement of home durability."

It certainly has all the attributes of a healthier home with low VOC finishes, a big Energy Recovery System (ERV) for fresh air, and importantly,

According to the V2COM press release, the houses are for sale, apparently built as a speculative project. It's unusual to see spec houses built to such high standards of efficiency and quality, and to not install gas when everyone wants their high-end Wolf gas range. That makes it all even more impressive. Nice work frombaukultur/ca.