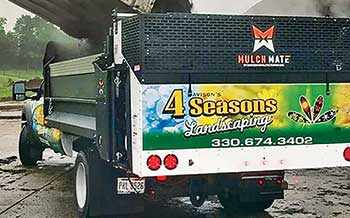 Handheld equipment has often taken center stage when it comes to battery-powered equipment in landscaping, but the time has come for those handhelds to share the spotlight with some new equipment that’s recently made its way into the green industry.

“I can see this battery equipment catching on in the near future, especially with emission regulations and fuel becoming scarce or more expensive to produce,” says Bruce Davison, owner of Davison’s 4 Seasons Landscaping in Berlin, Ohio. “Once people try the equipment and appreciate the same work getting done, but without the loud engines, I feel they’ll be switching by the droves.”

Landscape Management spoke to landscape contractors and manufacturers for their take on the latest battery-powered sprayers, material movers and mowers.

“Honestly, I was looking for something to help speed up loading wheelbarrows, and this machine did that,” Davison says. “Only, once we started using it every day, we realized how nice it was being so quiet with no running engines and with no fuel fumes.”

Craig Carlson, founder of Mulch Mate, says the lack of noise the Mulch Mate produces is what sets it apart from gas-powered machines.

For example, he says, in order to run hydraulic power, landscape pros need a gas or diesel engine running constantly to provide that hydraulic pressure, but with the Mulch Mate, it doesn’t run except when users touch the joystick.

“You’re using that battery power to energize the motors to pull in the material and transport the material only when you’re pressing the joystick,” Carlson says. “You can go into a community at 7 a.m. and start running mulch, while with some of the other gas-powered products, you can’t.”

Carlson recalls performing a job in a mostly enclosed church courtyard, in which people were having lunch nearby. “We were running our machine, dispensing mulch, and not one person complained about the noise,” he says. “When you walk up and drop your wheelbarrow on the ground to fill it, it makes more noise than our machine does.”

As far as challenges go, Carlson says it’s important to pay attention to the condition of the batteries and the amount of charge left in the battery.

“Battery power is so easy and convenient and almost effortless that sometimes guys forget that they have to be charged,” he says. “The biggest thing that still deters people is they think it’s not going to last long enough. That used to be the case, but as battery technology keeps getting better, the run time keeps getting longer as well.”

Davison says if the company didn’t charge the Mulch Mate batteries, the machine can run for up to a week; in the week the company tested out that theory, the machine moved 150 yards of mulch and ran for 30 hours.

To remedy any battery issues, though, Davison suggests carrying extra batteries in the trailer, ready to go in the charging station.

In addition to keeping the batteries charged, Davison suggests landscape professionals be patient to allow small equipment dealers and repair shops to work through a learning curve in order to service the equipment.

“It has a built-in pace-keeping feature along with the on-board regurgitator that will keep the solubles mixed well,” he says. “The output pressure remains the same to the last drop, and it sprays out 99.99 percent of whatever solution is in there.”

Greg Imus, president of Jacto, says the newer backpack spray models get 50 percent more autonomy from the batteries, there are no emissions and they weigh less than manual sprayers, despite misconceptions that they’re heavier.

“In the past, we’d get about 30 tanks of spraying, or eight hours of battery time; now, it’s about 12 hours of battery time between charges,” he says. “Originally, on some battery products, they were more or less homeowner products, but now they’re very much professional products, and you’re seeing more people interested in battery power than ever before.”

Imus adds that with a battery-operated sprayer, LCOs get 100 percent consistency with the amount of spray because there’s no variation in the pressure as they spray.

He advises that when storing the batteries in the winter, users should keep them indoors versus in an unheated tool shed, garage or shop to help protect the overall battery life.

Mainscape, headquartered in Fishers, Ind., started off the year with an all-in approach when it came to electric equipment.

The company, which provides maintenance and installation services to 70 percent homeowner associations and 30 percent commercial clientele, set up a trailer that has battery-powered handheld equipment and three Mean Green mowers.

“We committed one full electric rig that would never have gas on it and outfitted the trailer so that we could directly charge the trailer back at the office every night and just committed to that,” says Nate Hyde, vice president of Mainscape.

In addition to reducing noise, emissions and vibrations and saving on downtime, fuel and maintenance, Hyde says many customers appreciate the use of the mowers because they help support their sustainability initiatives.

“Those things are pretty friendly to our teams and to our customers,” he says. While the mowers do have some run time limitations, Hyde says his company has yet to bump into them.

“We’re mowing a full day’s route, and our teams are working the same as they would with a gas-powered fleet,” Hyde says. “I think there’s a perception that if we’re working for eight hours, our mow time should be eight hours. The mow time is really about four hours in an eight-hour day.”

For other companies looking to incorporate electric mowers, Hyde says the rollout process is critical.

The company took the opportunity to reward one of its best crews and asked for their help in piloting the innovation.

“We said, ‘You are not allowed to use any gas-powered equipment on this rig ever,’ making sure they were as committed to the electric power as we were,” he says. “That eliminated the opportunity for it to fail. I believe there’s a culture in our industry that people stick with what they know. New technology is not always given a fair chance.”