COVID-19 cases are surging. Is it possible to gather safely for the holidays? 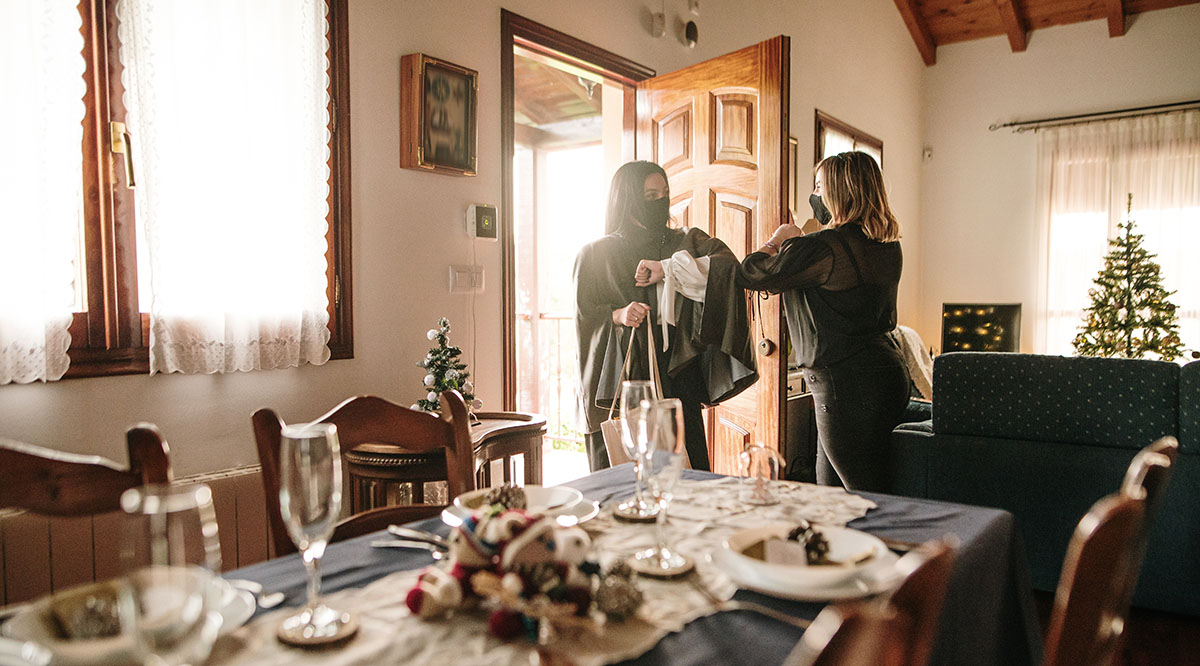 People all over the United States are facing a dilemma. After months of living through a pandemic that makes it safest to stay away from each other, the holiday season — a time for gathering with loved ones to share a meal and each other’s company — is fast approaching.

At the same time, COVID-19 infections are accelerating, and recent daily case counts have surpassed the highest counts earlier in the pandemic. The risks of COVID-19 are real, but so are the mental and physical health impacts of social isolation.

So how does one decide whether to hunker down and put off holiday gatherings until next year or to take a brief break from the mental and emotional strain caused by separation from loved ones?

It’s all a matter of risk tolerance and planning, according to the doctors and scientists who spoke to AAMCNews.

“No social gathering can be made entirely safe,” says Amesh Adalja, MD, a senior scholar at the Johns Hopkins Center for Health Security in Baltimore, Maryland. “You can make something relatively safe.”

The Centers for Disease Control and Prevention has released guidelines for ways to reduce the risk of transmitting COVID-19 this Thanksgiving, emphasizing that the safest option this year is to stay at home and celebrate only with your household members or virtually with others.

But for those who decide that the benefits of gathering outweigh the risks, here are some tips from the experts when planning get-togethers during the pandemic:

The first step is to communicate — and set expectations — with the people with whom you plan to gather, says Stephen Kissler, PhD, a postdoctoral fellow at the Harvard T.H. Chan School of Public Health Department of Immunology and Infectious Diseases in Boston, Massachusetts.

It’s a good idea to make sure everyone who will attend is on the same page about what precautions you will be taking, particularly if there will be attendees who are in higher risk categories.

“You might ask how socially interactive people have been,” Adalja recommends. “Have they been to parties and rallies or other things where they might have been exposed? Some people will say that’s fine; others won’t.”

Another thing to consider is whether to celebrate locally this year or to make a plan to travel safely to your destination.

James McDeavitt, MD, senior vice president and dean of clinical affairs at Baylor College of Medicine in Houston, Texas, recommends creating a holiday “bubble,” where every person planning to join the gathering agrees to strictly self-isolate for 14 days before getting together. He has developed a step-by-step guide for how to make the bubble as safe as possible.

He recommends appointing a “Family Bubble Commissioner” to ensure everyone follows the rules. His daughter will serve as commissioner for his family gathering, which will include family members ranging in age from five months to 78 years.

The advantage of this approach is that he feels confident his family will be able to have a “normal” gathering: indoors, without masks, and complete with hugging, singing, and other activities that would prove risky without a bubble.

The commitment to isolation is key from everyone involved — or else it creates a false sense of security, he says.

However, McDeavitt acknowledges that it is not possible for everyone to stay self-quarantined at home for so long.

Adalja doesn’t think it’s practical to ask people to completely isolate themselves for two full weeks. Instead, he recommends vigilance on other public health measures, such as wearing a mask and avoiding crowds, and being respectful of the risk tolerance of the people with whom you plan to gather.

McDeavitt recommends getting a polymerase chain reaction (PCR) test five to seven days before the planned gathering if you are committed to the self-isolation for the bubble. The PCR test is the “gold standard” because it is the most accurate test currently available, while the antigen tests that return results quickly have a relatively high false negative rate. However, the PCR test does have drawbacks. It may not detect the virus until several days after exposure and results can take several days to come back. Also, as case counts rise across the country, it could become more difficult to schedule an appointment for a test, according to Kissler.

Adalja cautions against relying too heavily on testing because it could give a false sense of security.

“The test is only giving you a clean bill of health for a moment in time,” he says. “The turnaround can be days and you may have been infected by somebody else [in that time.]”

However, it can reduce the risk. Kissler recommends getting a test if it’s available.

The warmer summer and fall months allowed people in many parts of the country to gather outside, where the open air helps dilute the virus, says Josephine Lau, PhD, an associate professor and graduate chair of architectural engineering at the University of Nebraska Durham School of Architectural Engineering and Construction who specializes in indoor air quality and ventilation.

If the weather allows, Lau recommends that holiday gatherings be held outside as well, with people distanced at least six feet apart or wearing masks if it’s not possible to stay distanced.

And if staying outside isn’t practical, she suggests opening windows to increase the ventilation in the house — though she doesn’t think opening a window alone will be enough to limit exposure. It’s also important that everyone wear masks and maintain the six-foot distance.

“Wearing masks indoors is especially important,” Kissler adds. He acknowledges it feels a little awkward at first but says he’s been surprised to find that wearing a mask around his family hasn’t impeded their ability to communicate and enjoy each other’s company.

In addition, a stand-alone particle filter air purifier or an ultraviolet-C (UVC) light can help reduce airborne viruses indoors, Lau says. The Environmental Protection Agency says that air purifiers can be effective at capturing viruses, and the U.S. Food and Drug Administration says that UVC lamps can inactivate some viruses. Lau recommends researching the effectiveness and safety of the purifier and to avoid any that produce harmful byproducts such as ozone.

She emphasizes that these machines are not enough on their own. They only add an additional layer of protection on top of other preventive measures.

If the gathering will include any kind of eating and drinking — which is often the centerpiece of holiday gatherings — the host should consider how to make it as safe as possible.

Kissler says it’s best to focus on individual dishes rather than shared dishes that can increase the chance of cross-contamination.

If there are shared dishes, Lau says one person should be designated the main server and should dish out the food while wearing a mask.

And though it’s impossible to wear a mask while eating and drinking, people should consider keeping the maskless portion of the gathering as brief as possible.

“People will have to take their masks off,” Kissler says. “It’s a matter of risk mitigation — limiting the amount of time in close proximity.”

There’s still much that scientists don’t know about COVID-19 and children, but there is evidence that children and adolescents can transmit the virus, even if it generally doesn’t get them very sick, McDeavitt says.

This may complicate gathering plans, as some children have been back to school, making it impossible to isolate, and it may be harder for children to grasp why they shouldn’t hug or sit nearby their family members.

McDeavitt recommends having conversations with kids so they know and are used to the appropriate mitigation measures.

“Really, just the same precautions apply to them as anyone else,” Kissler says.

Before leaving for your gathering or hosting people from out of town, it’s important to monitor the level of community transmission — both where you are and where you’re going, according to Krutika Kuppalli, MD, an assistant professor of medicine in the Division of Infectious Diseases at the Medical University of South Carolina College of Medicine in Charleston. Johns Hopkins University tracks daily statistics for each of the states and territories in the United States on its website.

Kuppalli, who will be working at the hospital on Thanksgiving and Christmas this year, also says it’s important to have a sense of the hospital capacity in the place where you’ll be gathering in case you or someone from your party needs hospitalization. The COVID Tracking Project by theAtlanticposts hospitalization data by state and links to public health dashboards that may provide more detail on hospital capacity.

“Are they at capacity? What if they don’t have room for me? There’s only a finite number of doctors and nurses,” Kuppalli says. “You can get sick while you’re traveling as well. Those are all things that people need to consider.”

If someone at the gathering begins to exhibit COVID-19 symptoms, they should isolate in a room by themselves with their own bathroom and make a plan to get tested as soon as possible, McDeavitt says. They should also cancel any plans to travel that might cause them to expose others in transit, he adds.

Public health advice has emphasized the importance of avoiding crowds and wearing masks in public places for months.

But in recent weeks, small gatherings have been a growing source of COVID-19 transmission, Anthony Fauci, MD, the nation’s top infectious disease expert, said in an interview with the Journal of the American Medical Association in late October.

With less than three weeks until Thanksgiving, all American states, territories, and Washington, D.C. reported a climbing number of COVID-19 cases, according to the New York Timesdatabase. If this trend continues, it might impact family plans, particularly for those who are in vulnerable categories.

“This might be the year to consider splitting into smaller [family gatherings],” Kissler says.

“Is there a way you can have a holiday with people around where you live? Do something outdoors? Can you communicate via video chat?” Kuppalli says. “I know it’s not ideal … [but] my biggest concern is that our health care systems are going to be overwhelmed.”

Adalja says that he expects COVID-19 cases will go up after Thanksgiving.

Still, people can reduce the chances of transmission by making plans that take the above precautions into account, the experts say.

“[It’s] just the fact that the virus will be making plans with you,” Adalja says. “Every activity you do.”