The Close to Home Issue of Humidifiers and Indoor Air Quality 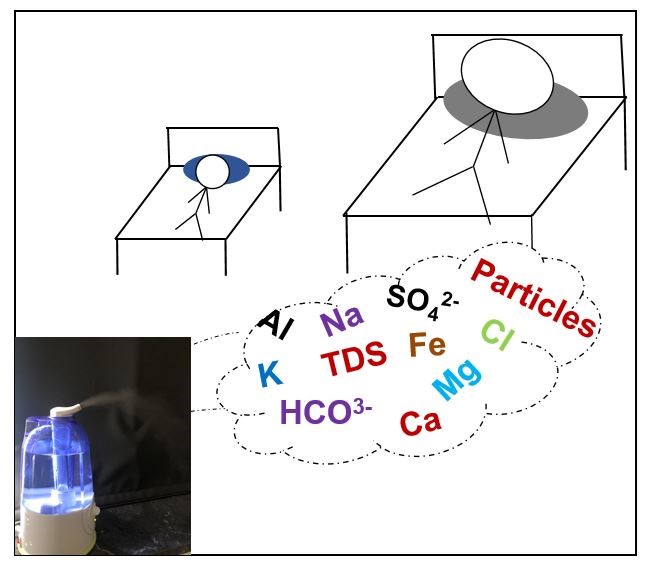 We have all heard about air pollution and how it can be detrimental to our health. Thedeterioration of air qualitycaused by factories, cars, and energy production is dangerous when it affects our cities and towns, enveloping communities in a haze.

One harmful agent within air pollution isparticulate matter(PM)— a mixture of solid particles and liquid droplets that exist in the air. Particulate matter is normally categorized as either PM(particles less than 10 micrometers) or PM(particles less than 2.5 micrometers). These particles are extremely small — PMparticles are at least ten times smaller than the width of a strand of hair. Though small, these particles can cause serious impacts when they occur in large numbers. PMparticles decrease visibility and cause irritation to our eyes, nose, and mouth. PMparticles are even more dangerous as they can enter deep into the lungs and evenmake their way into our bloodstream.Due to these risks, particulate matter in outdoor air and its connection with air pollution has received much attention. However, many people may be at risk of exposure to particulate matter indoors too. The scariest part: they may be creating this risk themselves through activities that generate readily distributed particles, like fireplaces creating smoke or using water to create aerosols.

Despite the little attention it receives, indoor exposure to particulate matter is common. In fact,nearly one-thirdof all anthropogenic PMdeaths are the result of indoor particulate matter production. However, it is much more difficult to monitor indoor air quality. Consequently, there are no set standards for indoor air quality and the public is much less aware of the possible routes of exposure to indoor air pollution.

Particulate matter can enter the air within our homes in many ways, but perhaps an unexpected source is our drinking water.

Despite being different states of matter, air and water are inherently connected. Minerals, molecules, and particles within water can transfer back and forth with the air in many ways. Scientists refer to this figurative boundary that particles cross as theair-water interface, and it has been receiving recent attention in the public health field. “There’s an increasing realization that chemicals in water are not simply a risk when ingested, but that they can cross the boundary and become part of the air that we breathe” saidAndrea Dietrich, a Water INTERface Interdisciplinary Graduate Education Program (IGEP) professor from the department of Civil and Environmental Engineering. Each time you shower, wash the dishes, or otherwise bring water into your home environment, the minerals and particles in the water can cross the air-water interface and affect air quality. This is problematic because many of the common minerals in water —calcium, magnesium, potassium, chloride, and carbonate — are actually healthy when ingested, but can cause issues when inhaled into the lungs.

Showering and doing the dishes are somewhat indirect forms of exchanging matter at the air-water interface, but many of us also use a purposeful water-air exchanger:the ultrasonic humidifier. Think about it, a humidifier’s entire job is to take the water you fill it with and push it across the water-air boundary. The ultrasonic version of the humidifier accomplishes this by emitting a cool mist that increases indoor humidity, which is often useful in areas with naturally dry air that can irritate our skin and airways and cause headaches. Many humidifier brands will recommend to simply use tap water to fill the ultrasonic humidifier’s reservoir. However, Virginia Tech researchers with theWater INTERface IGEPcaution that using regular tap water for humidifier fill water can create troubling particulate matter risks for people.

In thefirst experiment, a locally-purchased ultrasonic humidifier was placed in a dormitory room and filled with either distilled water or local tap water from Blacksburg, Virginia. The ultrasonic humidifier ran for eight hours, representing a fairly standard scenario of use for the modern consumer — running a humidifier in a bedroom while sleeping. During the experiment, several different sensors were used to measure particle concentrations, size, and mineral content.

A graphical representation of the humidifier experiment. Each ”X” represents a different sampling location. Credit: Wenchuo Yao.When filled with tap water, the number of particles present in the room was nearly 13 times higher than before the humidifier was turned on. Further, 95% of the particles were less than 1 micrometer in size, meaning they fall well within the range of particles categorized as potentially unhealthy PM. Many of these small particles also contained greater amounts of minerals than their larger counterparts, and the majority of particles were essentially “dried tap water,” meaning all water had evaporated leaving behind only extremely small mineral particles that could easily infiltrate the human respiratory system. In contrast, when using distilled water to fill the humidifier, particle concentrations in the room only increased marginally and thus posed much less risk compared to tap water.

Yao ledanother studythat used different types of water to fill an ultrasonic humidifier placed in a medium-sized conference room. Four different types of water were used to fill the humidifier. An extremely clean, filtered, and deionized water source was used as a control. Two other samples had high mineral content; one sample had high values of total dissolved solids (TDS) and hardness, and the other sample only had high TDS. Regular Blacksburg tap water was used as the final sample.

The researchers wanted specifically to test water types with different levels of TDS and hardness because they are measures of mineral content in water that are unchanged by typical water treatment. TDS measures all dissolved minerals in water, while hardness measures calcium and magnesium. High TDS and high hardness waters contain lots of dissolved minerals and are considered less “pure” than water with low TDS or hardness. High hardness water is avoided because it is associated with mineral buildup on plumbing fixtures, even though calcium and magnesium are necessary for good nutrition. Despite being bad for plumbing, both hardness and TDS in water are naturally occurring and not necessarily bad for your health. As water interacts with its physical environment it picks up minerals from soil and rocks, which increases its TDS content. Typical water treatment techniques do not remove minerals from water as it is often difficult and expensive, meaning that most drinking water contains substantial, but safe, levels of TDS for drinking. However, safe levels of TDS for drinking the water does not equate to safe air quality when using high TDS water as humidifier fill water.

The results from these two studies alone show that running a humidifier with tap water may be risky depending on the exposure time and particle concentration, with conditions consistently exceeding ambient air standards set by the EPA.Yao and her colleagues wanted to provide an even more detailed estimate of risk to humans by estimating how much of the particulate matter produced by humidification would actually end up in different regions of the human body.

To estimate inhalation exposure, Yao used themulti-path particle dosimetry model, or MPPD. The MPPD uses particle concentration and size data to estimate how much particulate matter accumulates in various regions of the respiratory system, like the nose, throat, upper lungs, and deep lungs. The Virginia Tech researchers provided the model with particle concentration and size data from their experiments and then ran the model for an eight-hour period to simulate sleeping overnight. The model was run for a variety of different age groups, ranging from infants to adults.

In general, higher mineral content fill water, which puts greater amounts of particles into the air, led to greater inhalation of particles. When inhaled, a large portion of particles were deposited in the deep lung area which can be detrimental to lung development in small children and can lead to respiratory issues in humans of all ages.

Model output also showed that over eight hours, adults inhale more emitted particles than younger age groups. This is not unexpected as adults have larger lungs that take in more air than children when they breathe. However, the key to calculating true exposure to PM is bodyweight. Because children weigh much less than adults, they are actually dosed with more than two times the amount of PM relative to body weight compared to adults.

The results are striking. Air quality is severely degraded when ultrasonic humidifiers emit minerals and the risk of inhaling PM is substantial. But why? And can it be avoided?

The why has to do withthe way ultrasonic humidifiers work. They have an internal device that vibrates and creates extremely fine liquid droplets that are ejected into the air as a cool mist. These fine liquid droplets contain TDS and fall within the range of PM, which pose risks when inhaled by humans. Despite the risk, the ultrasonic technology was seen as a breakthrough in the humidifier industry as it complemented the once ubiquitous steam humidifiers.

This research does not call for humidifiers to be discarded, but rather has highlighted some safer options. A steam humidifier could be used instead of an ultrasonic to circumvent PM concerns directly. However, because they do run hot, this may not be possible in some situations. If using an ultrasonic humidifier, air can remain of safe quality if distilled water is used as the fill water. Whatever option is chosen, it is advisable to steer clear from using standard tap water to fill an ultrasonic humidifier because of the associated health risks. As Yao said, “the humidifier may be an unexpected source of exposure to air pollution, but it should be taken seriously.”

By combining the knowledge, skills, and tools of scientists across different disciplines, the Water INTERface group helped identify and provide potential solutions to an important public health issue. This is but one striking example of the ways research, and especially interdisciplinary research, can help improve our world. “The world has all kinds of issues, but luckily we have all kinds of scientists who, when they put their heads together, can tackle those important to improving health and wellbeing,” said Dietrich.