How Much Should You Worry About Air Conditioning and COVID-19? 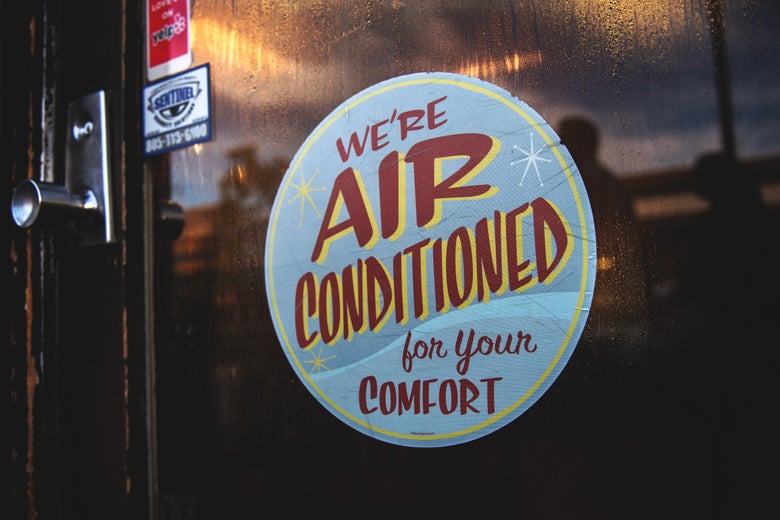 It’s summer, and it’s hot. We’re on pace for, yet again, the hottest year in recorded history, and in the U.S., heat waves are scorching the South and Southwest. This would usually be a great time to close up those windows, pull the shades, and crank the air conditioning. But with the pandemic raging in many of the country’s hottest areas, the public is getting mixed messages about the role of air-conditioning in spreading the coronavirus. “Air conditioners may be spreading COVID-19, experts say,” read a headline from one Arkansas news station. Another, from the New York Post, claims the opposite: “Air conditioners can help prevent coronavirus spread.”

At first glance, it sounds like these headlines contradict one another: Air conditioners either spread COVID or not, right? But I spoke with three experts to answer that question, and it seems that the role of air conditioning in spreading COVID-19 really depends on two things: the environment you’re in, and what kind of air conditioning that building uses.

To start, let’s consider one very high-profile COVID-19 study connected to air conditioning. Researchers in Guangzhou, Chin,a found that a restaurant air conditioning system blew droplets from an infected diner at one table to diners at two neighboring tables. This study has been used as evidence that air conditioning can spread COVID. That is, on its face, true, but it’s not the air conditioning itself that caused the problem—it’s more the otherwise stagnant air in the restaurant, says William Bahnfleth, a professor of architectural engineering at Pennsylvania State University who studies indoor air quality. Analysis of that case found that the restaurant had virtually no fresh airflow from the outside to diffuse any droplets in the space. “If there had just been a fan in that space blowing air around to keep people cool by convection, it would be doing the same thing” in spreading the virus, says Bahnfleth.

That reiterates what we’ve known since the beginning of the pandemic: Good ventilation is important, and being in close contact with someone indoors, where there’s little air circulation, is a major COVID-19 risk factor. (This is why being outside is a lower risk than being inside.) The risk factors for A/C spreading COVID-19 seem to be less about air conditioning itself, than the conditions it often creates indoors. Air conditioning systems are typically not great for ventilation, as they bring in little outside air and rely primarily on recycling indoor air.

Take a window air conditioning unit, for instance. Those work by taking around 80 percent of the air from inside the room and recirculating it, with the other 20 percent of air coming from the outside. HVAC (heating, ventilation, and air conditioning) systems that control central air work largely the same way, though they have a bit more variation in how much outside air is being mixed in. It’s economical from an energy perspective to take already-cool air from the inside and recycle it; each time hot outside air is brought into the system, it must be cooled, which uses more energy. A room cooled by a window unit or a ventilation system is going to be using recycled air in some way, as opposed to a breeze from an open window, which brings in all new air.

To get a sense of how much “fresh air” you’re getting inside, consider this: The CDC recommends that to prevent against airborne infections, indoor spaces should have between six to 12 full cycles of new air per hour. (Isolation units in hospitals are built to this standard.) But most buildings are only capable of one to two changes per hour, says Nardell. That means air flow in these spaces is pretty minimal, with fewer chances of dispersing COVID-19 droplets.

So that might make you think that air conditioning, as the Arkansas new station said, is a terrible idea right now. But it still depends on the specific conditions of a space. In some cases, it can be useful, because some air flow with A/C could still better than no airflow without. “If your small enclosed room is very poorly ventilated, and air just sits there for hours, air conditioning could help because you’re at least getting in that 20 percent of outdoor air and running things through some kind of filtration system,” says Linsey Marr, a professor of civil and environmental engineering at Virginia Tech who studies airborne transmission of viruses. But if that enclosed room also has lots of people, including one who is infected, that A/C could create more air currents to push around COVID droplets. That could carry droplets “very far from the infected person, and increases the raise of close contact risk,” says Bahnfleth; in that case, your safe “social distance” might increase from, say, 6 feet to 12 feet.

The jury is also still out on how much risk lies in actually recycling air through the ventilation system. At the moment, there’s not a lot of evidence that the virus actually spreads throughventilation systems. At least one preliminary, yet-to-be-peer reviewed study found viral RNA in hospital ventilation systems, but that doesn’t mean that active virus particles spread this way, and the authors are clear that there were no known infection events linked to those systems. Still, because scientists are still learning about how the virus can spread, it’s not a bad idea to change out your HVAC system filters, or upgrade them to a higher quality filter, says Marr. “The average filter probably removes about half of droplets and aerosols that we’re concerned about for coronavirus,” she says. Nardell also recommends that if possible, people use air cleaners or germocidal ultraviolet lamps, which could treat COVID-19 droplets before they circulate around a room.

If you’re concerned about going into buildings with air conditioning, there are a few things to consider. First, if you live in a residential structure with others, it’s unlikely you’d be at higher risk from your building’s HVAC system. Bahnfleth says most of those systems are designed to push air from the outside into your unit, then out. But this is a great time to ask your landlord or building administrator for more details about your system, just so you know whether it could pose a risk. The most important detail to ask about is how air comes into your apartment, and how it leaves: If the air entering your apartment comes from other units, or gets blown you’re your neighbor’s place, that’s worth knowing.

Second, if you’re worried about patronizing businesses, look for airflow: Do they have windows open? (Usually, places running A/C try to close off the space to maintain indoor coolness.) Is there good airflow inside — for instance, ceiling fans to keep air moving from open windows and through the space? Whenever possible, do what you need to do outside—eat on the patio, for instance, or arrange for curbside pick-up. If you do need to go into a building, don’t linger, especially if you’re crowded; get your groceries and leave. If you have control over your building’s HVAC system—like if you’re a landlord or own a small business—check to see how much outside air your system uses, and see if you can install a tougher filter. Increasing the system’s use of outside air may increase cooling costs, but it also could improve the safety of everyone inside. “In the HVAC engineering community, we are trying to apply what we call the precautionary principle: ‘One should take reasonable measures to avoid threats that are serious and plausible,’ ” says Bahnfleth. That’s good reason to be careful for now, but keep in mind that as more research comes out, recommendations may change: “We have to be willing to update our understanding as we go along.”