Spotlight: Residential HVAC and Supply’s Elena Holder is on a journey to know herself 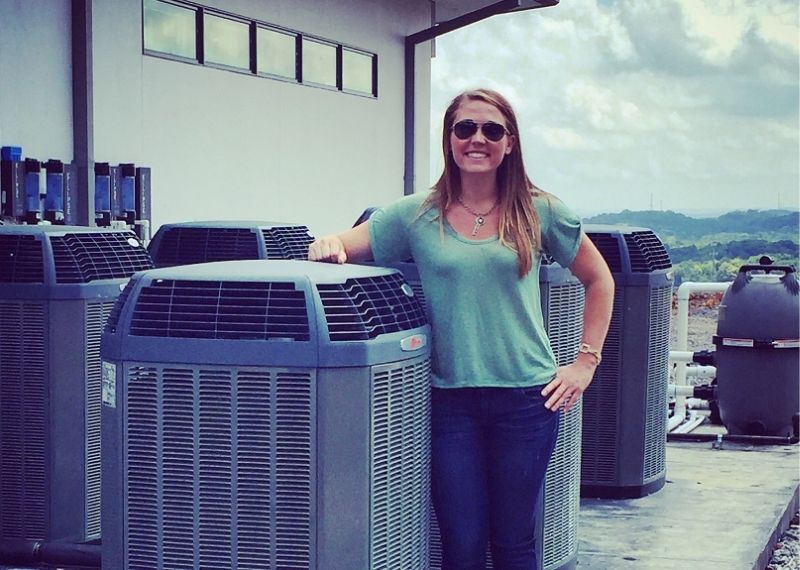 Elena with Trane units behind country music singer Garth Brooks’ house. In 2016, Elena was an account manager and her customer installed the HVAC equipment in Garth’s home—including top of the line variable speed units, CleanEffects™ whole home air cleaners and more. She said Garth was really friendly, too.

Elena Holder leads a team of 11 inside sales specialists and administrators in the Southeast region of Trane Technologies’ Residential HVAC and Supply business. Before she started with our company in 2010—first as a product management intern and then a member of our Accelerated Development Program—the HVAC industry wasn’t even on her radar.

“I hadn’t yet considered working for a manufacturing company, much less a career in the HVAC industry,” Elena said. “I was double majoring in marketing and advertising and had my sights set on what I thought would be a glamorous career in consumer and brand marketing.”

Instead, Elena chased the roles that scared her. Like the time she convinced the plant manager in our Residential HVAC facility in Tyler, Texas, to let her supervise an entire production line. She was a recent college graduate and had never worked in operations before—nor had she ever supervised a team of 76 people on the manufacturing floor. So, why’d she do it?

“I chase experiences that scare me because I know they will help me grow the most,” Elena said. “Supervising a production line was extremely intimidating, but I learned so much from that role—it was an incredible experience. I don’t think I was very good at it, but that role prepared me to lead people. It really toughened me up.”

Toward the end of her Accelerated Development Program experience, Elena decided that, in order to enhance her HVAC career, she needed experience in sales. But that meant uprooting her life—again—and moving nearly 500 miles away for an account management role in Nashville, Tennessee. It would have been so much easier and more comfortable to stay where she was, working in marketing in our Davidson, North Carolina, headquarters.

“I had put down roots in nearby Charlotte—I belonged to a CrossFit gym and I had friends—I loved it there,” she said. “I’d only driven through Nashville once, so I really didn’t know what it would be like to live there. It was another scary situation for me, but I remembered other times in my career when things felt scary and they really paid off. So I went for it.”

Elena enjoyed solving problems for her HVAC dealer customers in our Nashville, Tennessee, sales office. Her initial plan was to get some sales experience and then go back to her career in marketing, but she quickly realized that was no longer her path.

“I really liked sales,” Elena said, “and I wanted to stay. Working in sales was intimidating at first—customers tried to test me and throw me off with technical jargon. But I gained their respect by being transparent and unafraid to admit what I had yet to learn. It was fun to analyze my territory and uncover new opportunities to achieve or surpass my sales targets.”

So she forged a different path, adeptly uncovering opportunities with homebuilders in the Nashville area – “I felt like a detective, putting puzzle pieces together,” – and rising up the ranks to become a sales leader, and ultimately, customer support leader.

With each new role came uncertainties, unfamiliar challenges and scary moments. And growth.

“I’ve enjoyed each new role, but it was hard at first to lead the people I’d once worked alongside as an account manager,” Elena said. “They were all older than me, most were men—and I was just 28 when I became their leader. I worked hard to earn my team’s trust and break down barriers so we could be successful together.”

How’d she do it? ‘Do What Scares You’

Elena says her success is rooted in her desire to grow and willingness to learn from the people who report to her. She says her career has been a journey of getting to know herself.

“I know myself a lot better now than I did 10 years ago,” she said. “When you’re very intentional about development and honest with yourself about where you shine and where you don’t, that’s where the growth happens. You can’t be afraid to fail—failure is inevitable. So don’t turn away from those scary moments—instead, try turning toward them.”

Get to Know Elena Holder, in her own words:

Tell us about your family: I am the oldest of five siblings, some step- and some half-siblings. My full sister Lauren is six years younger than me and often gets mistaken as either my twin or my older sister, which I enjoy, although she is definitely the cooler, younger sister. In 2015 I met my husband Lakota when we joined the same CrossFit gym in East Nashville on the same day. We got married in 2018 and live in Nashville.

Best advice you’ve ever received: “Chase experiences, not titles.” – Mike Lamach, Trane Technologies Chairman and CEO, and “Don’t worry about the things you can’t control.” – My father (and lots of other fathers!)

Who is your inspiration? My grandmother Louise was a teacher, and she pioneered and brought women’s sports to her high school and other neighboring schools in Northern New York decades ago. I have always admired her for using her voice and leadership skills to make young women’s lives better. I hope to continue her legacy in a different but similarly impactful way.

What do you enjoy most about being part of Trane Technologies? I am super energized by Trane Technologies’ purpose: Boldly challenge what’s possible for a sustainable world. And it feels really good to be part of a company that has great leadership and invests in our development. I am part of Trane Technologies’ MBA program, and I’m so grateful that the company believes in me enough to invest in me. We have a lot of people who are really invested in seeing other people succeed, and in a very selfless and authentic way. I haven’t worked for our competitors, but my gut tells me we have the best of the best people.

What’s your advice for approaching new opportunities, even when they’re scary? Oftentimes, I think women disqualify themselves from opportunities because they’re afraid they’re not good enough. A lot of successful women I’ve worked with are really hard on themselves. Part of overcoming that fear is being honest with yourself and doing a lot of reflecting, and seeking counsel from people you trust. If you know who you are and know the value you bring to the team, you can more easily go after the opportunities you want.

What do women have to offer to the HVAC industry? I think the most important thing women offer is a different way of looking at things. Often an uncomfortable tension exists when there’s only one woman in the room—I’ve been that woman so many times in my career. But that tension is actually really good, because it helps people grow.

I’ve been blown away when some of my male counterparts have reached out to let me know I’ve helped them grow in some way. That tension and friction creates personal growth—I feel very fortunate that I can make an impact. I’m grateful for all of the experiences I’ve had with this company.