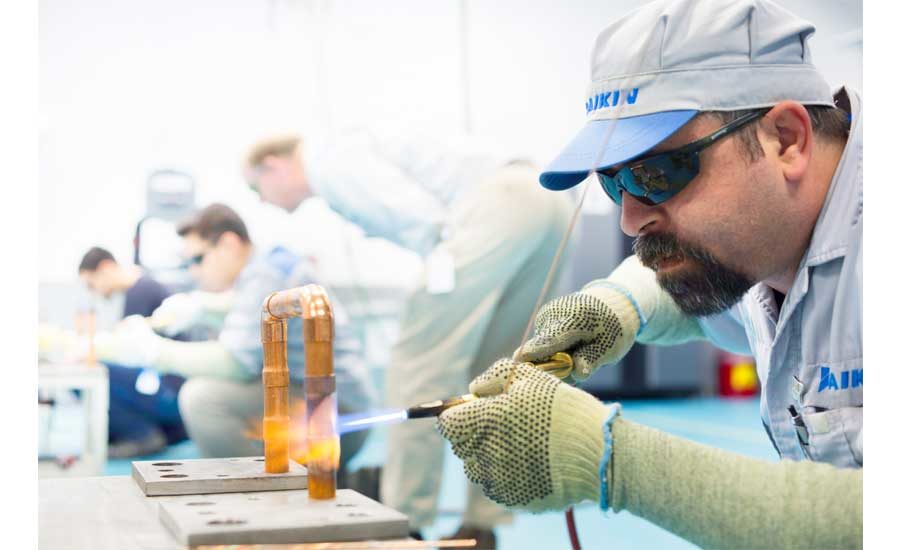 The HVACR industry has been debating how to handle replacing R-410A in comfort cooling equipment ever since the courts ruled in 2017 that the Environmental Protection Agency (EPA) did not have the authority to phase down HFCs. After that ruling, EPA promised to issue phasedown guidance regarding HFCs, but when that did not happen right away, many states started implementing their own HFC phasedown schedules. California has been the leader of this movement, proposing a GWP limit of 750 for all new stationary air conditioning systems (residential and commercial) starting Jan. 1, 2023. Other states like Colorado and New York are looking to adopt the Significant New Alternatives Policy (SNAP) program Rules 20 and 21 for a variety of end uses, including new centrifugal and positive displacement chillers, but are not currently pursuing unitary equipment.

In order to meet this deadline, OEMs started exploring lower-GWP alternatives to R-410A, and R-32 and R-454B are two of the refrigerants that several have chosen to use. (R-454B will be covered in a subsequent article.) However, both are A2L refrigerants, meaning that they are mildly flammable, and model codes do not allow their use in many types of cooling equipment. OEMs are hoping that changes to the code will allow its use in time to meet California’s deadline, which is not that far away.

R-32 is an attractive alternative to R-410A because it offers an excellent balance of cost, performance, and low environmental impact, said Scot Swan, global market manager at Arkema. In addition, it is already widely used in Asia and Europe, so it has the potential to become a popular choice for R-410A replacement in the U.S. as well.

“R-32 is already approved today in the U.S. for a few applications such as portable air conditioners, PTACs, and window air conditioners,” he said. “Globally, it has already been adopted in many more applications and is becoming the most prevalent refrigerant in HVAC. It has been widely adopted in systems and has been operating safely and efficiently in many other countries for several years.” In fact, Daikin estimates that across the industry, over 100 million units have been sold globally using R-32.

When compared to R-410A, R-32 offers several benefits, including higher capacities and lower mass flow rates, said John Maiorana, product support manager at Arkema. It is also a single component fluid, which means there are no glide or fractionation concerns that exist with blended gases such as R-410A or R-454B (another potential alternative for R-410A). In addition, single component refrigerants have one pressure/temperature relationship, which allows technicians to more easily become familiar with its properties, he added.

“Depending on the equipment designer, capacity gains of up to 10 percent and efficiency gains of over 8 percent can be achieved with R-32, while the amount of refrigerant charge is reduced when compared to R-410A or R-454B,” he said. “This means that smaller heat exchangers to transfer the equivalent Btu are possible. In addition, new R-32 compressor designs have been introduced that very closely match the design and footprint of R-410A compressors, yet offer increased capacities and eliminate any past concerns with high-discharge pressures without liquid injection.”

One OEM that has announced its intention to replace R-410A with R-32 in its ducted and ductless light residential, light commercial, and applied products is Daikin, whose North American companies include Goodman Mfg. Co., Daikin North America LLC, and Daikin Applied Americas Inc. The reason for this, explained Philip Johnston, PEng, general manager/low-GWP program leader at Daikin Applied Americas Inc., is that no other refrigerants have overall performance benefits that exceed R-32, and therefore, no other refrigerants bring the same customer and economic benefits.

“Let’s think about this in practical terms: A customer buys equipment capacity for cooling and heating of their space and also chooses whether they want minimum or higher efficiency levels,” he said. “In a given unit to deliver nominal capacity, we can run the compressor motor slower with R-32, meaning lower power consumption. Whereas for R-454B, the motor must be run faster to achieve nominal capacity, translating to additional power consumption, which negatively impacts efficiency.”

When testing R-32 and R-454B in certain applied variable-speed systems, Daikin has recorded up to 11 percent efficiency benefit for R-32. R-454B can make up for its efficiency loss by using more efficient motors and larger heat exchangers, said Johnston, but these technology updates could come at a cost to users.

Another benefit of R-32 is that its operating characteristics are similar to R-410A. Take, for example, condensing system pressure; if the condensing temperature is 115°F, the pressure of R-32 is 416 psia, while R-410A is 407 psia, resulting in a pressure difference of only 9 psi, said Johnston. While discharge temperatures for R-32 may run hotter in a drop-in test, he said, OEMs need only to reselect the expansion device to meet the limits set by the compressor manufacturers to ensure reliable equipment.

“For owners and operators who must balance both upfront costs with lifecycle operating costs, R-32 is a winner, with the bonus of environmental benefits,” he said. “Because R-32 is a single component refrigerant, its composition and quality will not change during recovery and can be easily reclaimed and recycled. R-32 can also potentially be reused more easily than zeotropic blends that may require additional steps to ensure composition and quality.”

R-32 has the ability to deliver more capacity at similar and/or better efficiency levels when equipment and components are optimized for use with the fluid, but it does have a higher GWP than R-454B, said Shane Angle, vice president of sales and technical services at Emerson Air Conditioning.

“The GWP of R-32 (675) is higher than R-454B (466), but it is still much less than R-410A (2088),” he said. “In addition, R-32 and R-454B have been used successfully in other parts of the world in a number of applications, and both refrigerants have been further assessed to Emerson standards for use in future compressor solutions for various global applications.”

Indeed, for a new system that is optimized for R-32, the charge level could be as much as 40 percent less than R-410A, said Johnston. In drop-in tests in certain applied unitary equipment for which piping and heat exchangers have not been changed, there is an approximately 20 percent reduction in charge.

“Not only is the actual GWP on a pound-for-pound basis about one-third that of R-410A, but less refrigerant means less can leak over the product lifetime, so really, R-32 has a direct GWP benefit of about one-quarter that of R-410A,” he said.

As for charging a system with R-32, Johnston noted that as a single-component refrigerant, a system can be topped off in gas or liquid phases without worrying about composition changes. He noted that R-454B has glide of 2.7°F/1.5K, so it’s not recommended to refill R-454B due to the possible change in composition. In addition, when filling R-454B, the cylinder must be upside down to charge in the liquid phase.

In order to work safely with A2L refrigerants such as R-32, technicians will require some new tools and test instruments, as well as training.

“Gas/leak detectors and recovery machines are the major tool changes technicians will need to purchase,” said Maiorana. “Recovery cylinders will also require proper labeling, and technicians will need to be trained by the OEM specific to the systems they are working on. Aside from flammability, servicing an R-32 system will not differ from servicing existing R-410A systems.”

Johnston stressed that it is also very important for technicians to ensure that the recovery machines they are using are approved for use with A2L refrigerants.

Training is probably the most important consideration for the upcoming transition to mildly flammable refrigerants, and contractors and their technicians should be educated on the safe handling, transport, storage, installation, and recovery of A2L fluids, said Angle. They should also be aware of the status of state and local building codes relative to the use of mildly flammable A2L refrigerants.

“AHRI has formed a Safe Refrigerant Transition Task Force to evaluate and address gaps across the entire supply chain in the safe refrigerant transition to low GWP refrigerants,” he said. “One of their focuses is the safe handling, transport, and storage of A2L refrigerants, and their evaluation in this area is scheduled to be completed in the next few months.”

In addition to AHRI, manufacturers such as Daikin plan to offer their own training programs that cover the safe handling and installation of A2L refrigerants, while Arkema is partnering with ACCA to do the same. Johnston noted that ASHRAE, North American Technician Excellence (NATE), and others are also developing new training and testing programs for contractors and technicians to learn how to safely handle A2L refrigerants.

The only remaining question is, when will equipment containing R-32 be available on the market? Basically, it all comes down to the adoption of codes and standards that allow the use of R-32 in comfort cooling equipment.

There has been some movement as of late, as the EPA just recently prepublished its new SNAP Rule 23, which would deem R-32 as acceptable for use in many types of new residential and light commercial cooling equipment. Specifically, the rulemaking is “proposing to find R-32 acceptable, subject to use conditions, for self-contained air conditioners that are typically larger than room-size (e.g., rooftop units, water-source heat pumps, and ground-source heat pumps) and split systems, which are part of the residential and light commercial air conditioning and heat pump end-use.”

As for safety standards, ASHRAE 15-2019 and UL 60335-2-40 (third edition) already recognize A2L refrigerants for human comfort applications, but the uniform and international codes do not. Given that the 2021 code cycle has closed, and the new code development cycle for 2024 is now underway, some states are looking to amend their laws to allow the use of A2L refrigerants. Washington state, for example, has already done this, and California is looking to do the same.

“Jurisdictions like states, cities, or municipalities need to adopt the latest model building codes that reference the ASHRAE and UL standards,” said Johnston. “We need to develop products to these standards and train our sales teams and customers. I suspect certain products will launch in time for California's deadline of January 2023.”

And those new products will use R-32, which Daikin believes to be the best alternative to R-410A.

“Pure, single component R-32, a single carbon molecule, a widely available commodity refrigerant, is the most balanced and ideal refrigerant solution to replace R-410A because it outperforms R-410A,” said Johnston. “R-32 provides the best situation for our contractor customers and end users because of its incredible thermodynamic characteristics that allow for improved energy efficiencies as well as smaller equipment — that’s real value for every end user, whether the low-income sector or the environmentally conscious.”

The second part of this article series will cover the use of R-454B.