What to Know About Radiant Heat Flooring 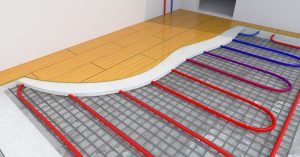 If you’re renovating your home or upgrading your heating system and want to literally avoid cold feet, is the number one choice. While it sounds like a luxury, it’s actually an energy-efficient and convenient heating solution.

Radiant floor heating, also known as underfloor heating, is actually a very old technology. Called hypocausts, the ancient Romans warmed their marble floors and the famous Roman baths by having slaves tend to wood-burning fires below the flooring. The heat from the fire radiates upward, keeping the floor comfortably warm.

Yet that’s just the earliest example in the west. South Korea has a long history of using ondol, which is also a radiant floor heating system. Dating back to the second century, it also heats floors from underneath. The earliest version only heated part of a room, though. It wasn’t until the 13th century Goryeo Dynasty when the entire room became heated. By the Joseon Dynasty in the late 15th to early 16th century, it became the prevalent heating method and persists to this day even after South Korea embraced many western building traits.

Centuries later, after a visit to Japan where he saw the Japanese version of ondol, architect Frank Lloyd Wright became a fan of radiant floor heating systems. He added them to the concrete floors of his Usonian homes. Post-WWII housing developments, like Long Island’s own Levittown, followed Wright’s lead.

Radiant floor heating involves directing heat, either hot water in tubes, electrical lines or hot air, to the underside of a floor. The methods vary slightly according to the type of underfloor heating system installed but otherwise, they’re exactly the same. Heat is directed throughout the entire room, not just along baseboards or radiators. It’s essentially silent. Unlike central heating through ductwork, it doesn’t trigger allergies or need expensive cleaning to maintain good indoor air quality standards.

While it may sound extravagant, underfloor heating is very energy-efficient. If central heating air ducts are in the ceiling or high in the wall, the upper part of a room may be heated more than the areas where people actually are. Baseboard heating may keep the area next to it toasty but often the system has to run longer than a comparable radiant heat system to get the same level of comfort. Radiators can have problems similar to baseboard heating while affecting an even smaller area.

By contrast, radiant floor heating warms the entire floor and therefore, the whole room. Because cold air goes down, it’s easy for feet to be cold in an otherwise warm room. Underfloor heating systems solve that problem. Since heat rises, it makes more sense for the heating source to start below you. Then, in addition to toasty feet, you’ll feel more comfortable as the heat radiates up. Heat trapped at the ceiling where it does no good is generally not an issue with radiant floor heating systems.

Radiant floor heat is also more energy-efficient. Heat isn’t left or lost in ductwork like with central air. The mix of comfort, convenience, and efficiency is why Richard Trethewey, This Old House’s long time plumbing and heating expert, loves radiant floor heating and installs them in during TOH projects whenever possible.

Old hydronic radiant heat systems used metal and/or copper tubing to distribute the hot water. That worked well until eventually corrosion caused a leak. Modern hydronic underfloor heating systems use Pex Tubing, which is a specially treated polyethylene tubing. Because it’s inert plastic, it won’t corrode like metal tubing can. Pex can also be installed in long runs that require few fittings, which also reduces the risk of leaks.

While radiant floor heating has all of these benefits and more, they also have certain installation considerations. Talk to our experts here at Tragar and we’ll analyze your specific needs and help you determine if underfloor heating systems are right for you.

As a third-generation, family-owned and operated company that’s been serving Long Island families for more than fifty years, here at Tragar Home Services we have a long history of providing exceptional heating and cooling services. For more information on our heating services or to schedule a consultation, just call (516) 221-2559 or fill out this form for a service request.