Radiative cooler that cools down even under sunlight 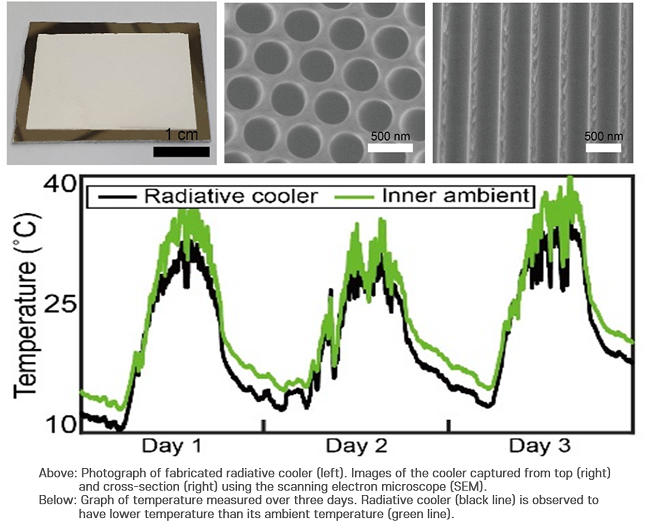 Recently, a joint research team from POSTECH and Korea University has demonstrated a daytime radiative cooling effect which exhibits lower temperatures than its surroundings even during the day.

The study was published in the latest online edition of Nano Energy, an international journal in the energy sector. With growing interest in energy consumption, such as environmental pollution and limitations in using fossil fuels, attempts to lower the temperature without consuming energy continue.

Unlike conventional cooling systems, radiative cooling is difficult to apply to large areas, although it has the advantage of significantly reducing energy consumption like electricity. Research to overcome this issue is being actively carried out around the world but it is still challenging to commercialize the technology.

To this, the joint research team found a very simple solution. Just by coating the porous anodic aluminum with a thin film of silica*¹, it has been confirmed that there is a cooling effect that exhibits a lower temperature than the surroundings even under direct sunlight.

Experiments have confirmed that an optimised structure can have a reflectivity*² of 86% in the solar spectral region and a high emissivity*³ of 96% in the atmospheric window (8-13 μm). In addition, the radiative cooling material – produced in centimeters – showed a cooling efficiency of up to 6.1°C during the day when the sunlight was strong.

“This newly developed radiative cooling material can be easily produced,” explained POSTECH Professor Junsuk Rho. He added optimistically, “It will help solve environmental problems if applied to heating and cooling systems since it can be readily applied to large areas.”

This research was supported by POSCO’s Green Science Program, the Future Materials Discovery Program, Mid-career Researcher, Global Frontier, Regional Leading Research Center, and the Research Leader programs of the National Research Foundation of Korea funded by the Ministry of Science and ICT of Korea and the Global PhD Fellowship from the Ministry of Education of Korea.

The most commonly present component in the earth’s crust, present in almost all rocks as a silicate mineral combined with other elements.

The efficiency of energy released on the surface of an object in thermal radiation. It depends on the type and thickness of the object, surface condition, temperature, and wavelength of heat radiation.