Build Your Own COVID-19 Air Filter 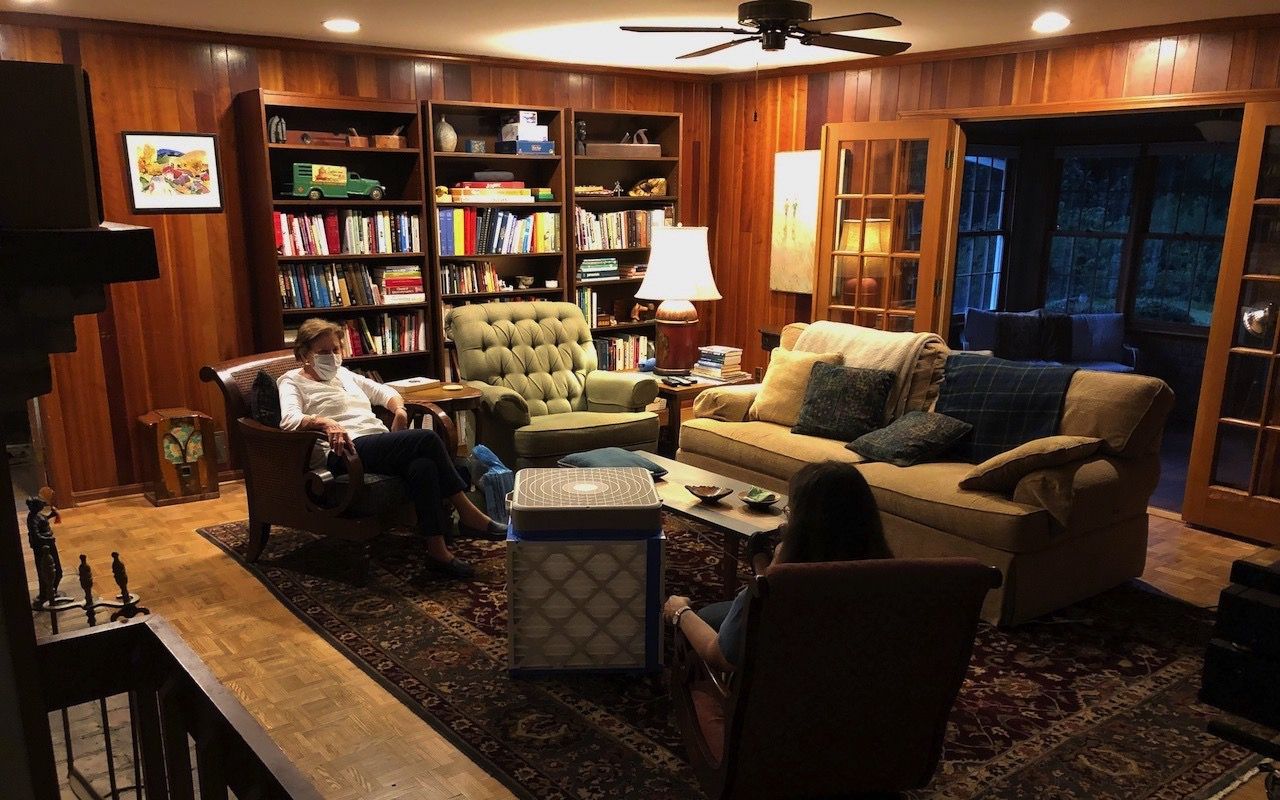 The Centers for Disease Control and Prevention recently released guidelines confirming that the virus causing COVID-19 is an aerosol, a very fine mist that travels much like smoke. Building scientists and engineers have been saying this for months, and they know what is needed to deal with smoke (which is made up of tiny floating particles): ventilation and filtration. Many in the community have been coming up with DIY designs for filters, including physicist Allison Bailes of Energy Vanguard, known to Treehugger for everything from his composting toilet to his research on particulates and his infamous post, "Naked People Need Building Science." But first a little background.

Most people are familiar with the filters that go in our home forced-air heating and cooling systems, which are fine for removing dust. Filters are rated on a scale called MERV (Minimum Efficiency Reporting Value). Most home furnace filters have a MERV Rating around 8, which will take out pollen and dust. But a MERV 8 filter is not fine enough to take out PM2.5 or viruses; for that, you need at least MERV 13. But the higher the MERV rating, the more air resistance and pressure drop across the filter, which is why we don't have MERV 13 filters in our furnaces; it would need a bigger fan and bigger ducts. it's a compromise of filter efficiency and energy efficiency.

In response to the COVID-19 crisis, people started taping filters to cheap box fans, but not a lot of air would get through the filter and there were worries that the fan might overheat. So the challenge, much like those steely-eyed missile men had to do in Apollo 13, is how to get more air through more filter, using basic cheap materials. The difference is that our modern engineers have the whole Home Depot for their supplies.

The design that seems to be the most popular has become known as the Comparetto Cube, after home performance contractor Neil Comparetto, who recently put instructions up on YouTube. Allison Bailes describes the process in words, but as he notes, it is pretty straightforward: Get a box fan and four MERV 13 filters and tape them together. (More detailed instructions on the Energy Vanguard site.)

Shawna Henderson (who writes an important post on the subject, "3 Principles for Good IAQ: Eliminate, Ventilate, & Filtrate") wonders what the MERV rating of a Persian carpet is, but the bottom should be sealed with cardboard.

Passive House Consultant and building analyst John Semmelback tested his own Comparetto Cube with different filters to figure out how much air they actually filtered, and the large surface area of the cube allowed twice as much air to pass through, compared to designs where the filters are simply taped to the fan. This is really impressive for something that is so simple to make.

At the end of his post on building his Comparetto Cube, Allison Bailes complains about Twitter being a hellscape. But I have been consistently impressed with the openness, the sharing of information, the cooperation, and credit that is being exchanged among the whole building science community, much of it on Twitter and Facebook. This is social media at its best, designing, improving, and testing such a simple approach.

Bailes also reminds us that the filter on its own is not enough. He describes the other measures that his family takes:

Allison Bailes lives in Atlanta, where some people do not take COVID-19 very seriously. But he holds a doctorate in physics, he understands the science, and is a good role model here. We still need to separate, we still need to ventilate, and it helps to filtrate.