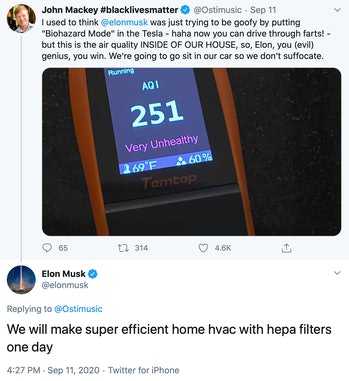 Writing via his Twitter page, the Tesla CEO claimed the firm could release a system with high-efficiency particulate air filters similar to the ones used in its Model S and X vehicles. The comments came in response to a post from composer John Mackey, who found that his Tesla’s “biohazard mode” made it so his car had better air filtration than his home.

It’s the latest in a series of comments about Musk’s nascent plans for an “HVAC” system, and helps illuminate what could be some of the product’s biggest selling points: The hypothetical system could leverage technology similar to that used with its cars’ “Bioweapon Defense Mode.” Musk has also suggested that it could collect and heat water while offering quiet operation.

When Tesla launched the Bioweapon Defense Mode feature in 2015 with the Model X, Musk claimed it could filter viruses 800 times better than normal. Experts have questioned whether the mode would in reality protect against a bioweapons attack as it’s hard to know when such an attack is taking place, but Tesla’s own testing data found it could bring in-car pollution down from 1,000 micrograms per cubic meter of PM2.5 to undetectable levels.

Mackey’s testing equipment found Tesla’s in-car system can make a measurable difference to air quality. In uploaded photos, Mackey found the air quality index or “AQI” measured at 17. Inside his home, the AQI measured as 251 or “very unhealthy.” Outside in San Francisco, the air quality measured at 351 – at a time when wildfires have been raging across the state.

Responders to Musk questioned whether such a system would be a particularly novel addition to the market.

Twitter user Stephen Andersen pointed to the Molekule line of air purifiers. Consumer Reports, in its poor review of the Molekule, suggested three alternatives: the Alen BreatheSmart Classic, the Blueair Blue Pure 211+, and the Honeywell 50250.

In response to a question about whether he could buy such an air purifier to receive similar results, Mackey wrote that he’s “sitting next to one, and the AQI is still 141. A portable filter in an open-floor-plan older house can only do so much.”

Beyond air quality, Musk has floated a number of ideas for Tesla’s product. During the company’s first-quarter 2020 earnings call, Musk claimed he was “extremely excited” for a system that could offer high-quality filtration. This could filter “viruses, bacteria, pollen, fungi, but also neutralizes silicon alkaline gases, that is quiet and efficient.”

Other ideas suggested by Musk over Twitter include the potential to “tap the condensation for water too,” circling it around instead of dumping it to the ground. The system could also speak to vehicles to know when a user is arriving home, ensuring there is “no wasted energy.”

THE INVERSE ANALYSIS – In many ways, it’s classic Musk. The CEO is known for his comparatively free-flowing approach to Twitter, okaying product features, and casually revealing future plans. Musk is also someone that looks to contribute with ongoing news issues, like when he previously highlighted his cars’ roles in the California wildfires or when he announced plans to contribute ventilators to the coronavirus pandemic.

But far from a flight of fancy, a Tesla HVAC would be a logical expansion of Tesla’s product lines. It leverages existing technologies from its cars, adds to its home energy lineup, and helps the company grow in a key area of expansion. Musk wants to increase the firm’s energy product revenue from six percent of its total to 50 percent. It’s an ambitious target, but a Tesla HVAC could help make it happen.