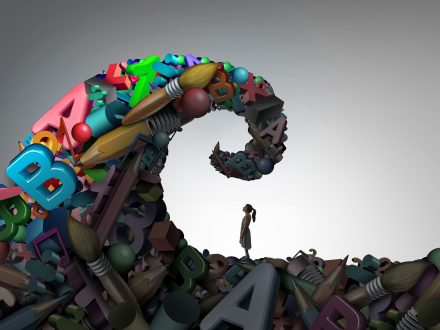 Dyslexics are creative, entrepreneurial, innovative, and problem-solvers that think differently, so it is hardly surprising that so many end up in engineering where they can put their abilities to good use.  I should know. I became an engineer after leaving school with just the one O level in Technical Drawing.

These creative and problem-solving talents are at the heart of engineering and I believe it is time to focus these strengths rather than the challenges.  To raise awareness of the issues within our industry and profession, for 2020, we have established the first ever Dyslexia in Engineering Day on 8 October.

The day falls during National Dyslexia Week (5-11 October), which I expect, unless you have personal experience of someone with the condition, you will be completely unaware.

With modern, advanced technologies redefining literacy, we are relying less on solely text-based learning, and increasingly using digital communication with social media graphics and video.  It is time to revise the old perception of dyslexia; to spend less time talking about the associated weaknesses and redirect the focus of the engineering fraternity towards embracing everyone’s abilities and skills.

If you work in the HVACR industry, you will almost certainly know someone with dyslexia, a learning disability that affects skills involved in reading, spelling and writing.  There is an even greater chance that you will be unaware of those around you that hide their challenges due to the stigma that comes with it. Most believe that they must hide it from their employers and colleagues due to negative perceptions. I know this because a number within the cooling and heating industry have told me that they don’t want to ‘going public’ to detract from the reputation they have already built up or to damage their career prospects. And see how often the word ‘embarrassed’ crops up in our contributors’ experiences below.

This is particularly concerning, given that there is plenty of evidence associating dyslexia with entrepreneurial skills – with the phenomenal business success of Richard Branson being one of the most well-known examples.

Dyslexia is said to affect between 3 and 7 per cent of the general population. However, up to 20 per cent may have some degree of symptoms. While dyslexia is more often diagnosed in men, it has been suggested that it affects men and women equally.

The British Dyslexic Association says: Dyslexia is a learning difference which primarily affects reading and writing skills. However, it does not only affect these skills. Dyslexia is actually about information processing. Dyslexic people may have difficulty processing and remembering information they see and hear, which can affect learning and the acquisition of literacy skills. Dyslexia can also impact on other areas such as organisational skills.

It is important to remember that there are positives to thinking differently. Many dyslexic people show strengths in areas such as reasoning and in visual and creative fields.

There is very little research around dyslexia in engineering specifically, but the small amount there is, combined with anecdotal evidence suggests that within engineering, the percentage affected could be significantly higher than that 7 per cent estimate and possibly double that.

One aim of Dyslexia in Engineering Day is to acknowledge and encourage dyslexic individuals currently working in the HVACR industry or considering it as a career by sharing the experiences of others.

We are thus very grateful that two individuals who have achieved notable success in very different ways in their respective sectors have agreed to share their experiences: Andrew Chandler is chief executive of HVACR controls giant Resource Data Management, while Paul Hull is campaign director of the Gas Safety Superheroes and managing director of plumbing and heating installer the Commercia Group.

The theme of this year’s National Dyslexia Week is to explore ‘dyslexia creates’ – looking at the at the power of dyslexia to create ideas, organisations and society and the invaluable contribution this makes to the UK. It is recognised, however, that dyslexia also creates challenges and barriers, so this theme will enable us all to explore the support that will empower individuals to achieve their potential.

I believe that this year’s theme for the week fits perfectly with engineering’s highly technical environment, in which the ability solve complex problems has never been more important.  I also hope that our first Dyslexia in Engineering awareness day will encourage the engineering societies and employers to think about what they can do to support those with dyslexia and to recognise the hidden opportunities that dyslexia can provide.

Dyslexia covers a huge umbrella and manifests in so many different ways. A lot of famous folk, including Albert Einstein, Walt Disney, John F Kennedy and Steve Jobs, to name a few, were dyslexic.

Most creators who as children at school were accused of ‘day dreaming’ have some kind of dyslexia. Those dreams however often led to amazing discoveries or inventiveness.

There are a lot of engineers who suffer from dyslexia either number- or word-related.

For me, the biggest area of frustration and embarrassment has always been form-filling. My handwriting and spelling are poor, so consequently as a field service engineer, I never liked completing paperwork as I was embarrassed.

Today with tables and electronic forms, it is much easier.  There is much more awareness now and if children are identified as suffering they get extra help with studying and a little extra time with exams.

This type of approach could be extending to engineering training courses of any type too - but the stigma of being dyslexic needs to be overcome, as still many folks do not like to admit they have some kind of dyslexic tendency.

In engineering it was always hard reading manuals and I have found that diagrams always make it so much easier to understand how a system works or is supposed to work. They say a picture paints a thousand words. For someone with word dyslexia, I say a picture can paint tens of thousands of words.

That is the reason that the Internet and video streaming platforms like YouTube are so powerful for engineers, because its full of pictures and videos. Perhaps this is one of the reasons why I built a business around internet connectivity.

Think of something as simple as reading out the winners when sponsoring awards: I used to get very embarrassed because I was always concerned I would not be able to read and properly pronounce the name of the winner on the card. The measure of having some extra seconds to read the card before going on stage was simple yet helpful.

Articles like this will help open discussions and hopefully promote a better understanding of the challenges.

Ever since I can remember, I have always felt there was something different about me. I never ready fitted in at school. I struggled immensely with English, but really enjoyed the more practical subjects.

I was very embarrassed by spelling and handwriting and I hid it for over 40 years.

In 1984, aged 14, I started working as a “Saturday pup ” in Hayes plumbing centre in west London and by 1986,  I was offered an apprentice by Maxglow. I didn’t know it at the time, but this would change my life.

I went to Richmond-upon-Thames College for four years. I loved it – but I did not know at the time I was dyslexic. I found some of the writing and exam questions very hard, but I was able to pass through all the practical assessments with ease.

Now take a big jump forward to 2015, when I decided to tell people I was dyslexic, because I felt it was nothing to be ashamed of. I’ll call this my Eureka moment!

I must admit I felt liberated and I decided to tell my story to help others, so that they do not have to suffer in silence like I did.

I actually find being a plumbing heating engineer with dyslexia is an advantage at times. You may be surprised by this, but I have the ability to think out of the box and to solve problems - and I never let anything beat me.

I hope the industry gets behind this campaign and helps the younger generation who might be dyslexic. We desperately need to attract them as they may be some of the greatest minds in history.”