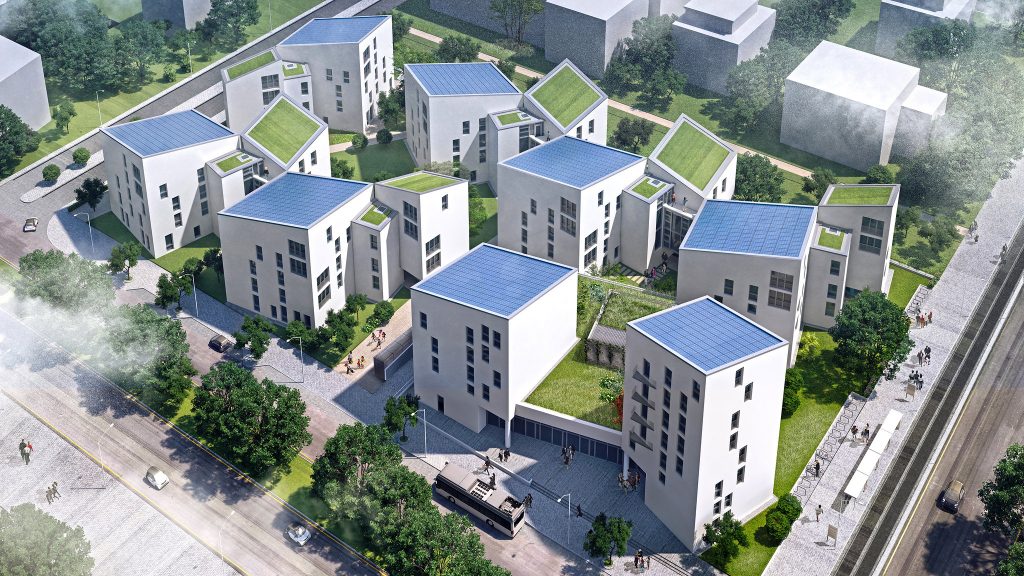 A pioneering German housing project is being viewed as a potential model for low carbon heating and ‘local generation’ in the UK to help meet Net Zero targets.

The Future Living Berlin (FLB) development, part of the city’s wider smart city project, sees its residents generate 90 per cent of their own electricity, through a combination of air-to-water heat pumps, solar PV and storage batteries, governed by an energy management system.

Panasonic, the technology provider, believes such packages can be a template for other countries seeking to decarbonise.

Enrique Vilamitjana, the md of Panasonic Heating and Cooling said: “Heating with a heat pump powered by green electricity uses 20 times less COthan natural gas heating…Future Living Berlin has the combination of a [green] government policy, an innovative construction method, a positive financial framework and technology partners that can deliver the results: with a similar combination, this can happen anywhere.”

He said that the manufacturer had an ambition to take a leading position in heat pump sales in Europe and the UK: “We have the technology, we have the brand and we have the route to market…The utility business is a complex business, so we are offering the ability to optimise energy performance – to offer technology that solves the complexity issues.”

Panasonic is also working in parallel on development of pure hydrogen fuel cells for both power generation and heat, it said, with a goal of having commercial cells  available in Japan by next year and in Europe by 2025.

The Berlin project utilises the German Mieterstrom regulation, which loosely translates as ‘tenant-generation’, so that the residents of FLB can choose the microgeneration package as an option from the energy provider Polarstern. The price of electricity is around 15 per cent cheaper than the alternative from the grid, FLB says.

The FLB project comprises 90 residential apartments and 10 commercial units in the Smart City Quarter technology hub in the south of the city. Groundbreaking for the units by developer GSW Sigmaringen was in July 2017, with the heat pump installation taking place in December 2019,

The Berlin installation incorporates 600 Panasonic HIT PV panels, which supply a capacity of 195 kW. It currently has 17 heat pumps, providing space heating and cooling and hot water, and which feature the Aquarea Service Cloud facility, which allows the installer to remotely monitor the performance and to run preventative maintenance schedules and diagnostics. This, the manufacturer says, in turn saves further CO emissions from reducing maintenance visits.

The residents can monitor their own power usage and temperature settings accordingly via the Aquarea Smart Cloud function.

The manufacturer said it believes that the Berlin project will provide the best kind of field trial – one with real users.

Ralf Becker, Project Leader for the Energy Group at Panasonic’s R&D Centre Europe said: “The solution is a world first - developed as a joint venture with leading research institutions for decentralised energy management. In simulations together with university test labs we achieved an improvement of used energy by up to 15 per cent.“

Future Living Berlin residents are taking part in a wider green initiative, incorporating elements such as car sharing and shared washing machines. As the project also involved ‘smart and connected’ ambitions, residents have IoT connected TVs, security and other appliances.

The manufacturer has been working on similar projects in Japan for the last five years. Its Sustainable Smart Town project in Fujisawa is targeting 70 per cent CO reduction in 500 detached houses, while its SST project in Suita, Osaka is planned to have 362 houses when it opens in 2022.