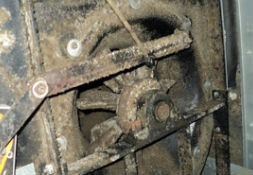 Sick building syndrome is a concern of every person who spends most of his or her days located indoors in a building with an active HVAC system — that is, the majority of us.  But sometimes circumstances take us beyond the normal concerns involved in sick building syndrome — mold, chemicals, allergic reactions, general malaise, etc. — and we find we’ve entered the zone of all-out infectious disease concerns.  That’s where we find ourselves right now, with the rapidly spreading H1N1 pandemic.

The seriousness of the situation has been underscored effectively by Laurie Garrett in a recent article for Newsweek.  Garrett, a senior fellow at the Council on Foreign Relations and a long-time writer about pandemics, revealed in “Surviving Swine Flu” (Sept. 19) that she herself had come down with the virus, and that although H1N1 is technically a mild virus, in actual experience it could only be considered so by “somebody who hasn’t been laid low by H1N1” and suffered the resulting “days of semi-delirium, muscle aches, fatigue, nausea, and stomach twisting.”

She pointed out that White House science advisors are predicting fully half the U.S. will be sickened by the virus, and then drew an ominous conclusion from her personal experience: “If the duration and depth of my personal illness are any indication of what’s in store, and if scientists have correctly predicted that the bulk of infections in the U.S. will slam the entire nation long before vaccines are available, we are in trouble” — not from mortality rates, which are expected to be proportionally very low, but from the fact that half of us are about to get sick at roughly the same time, which will cause all sorts of problems.

The thing that ties the issue directly back to Just Venting’s signature focus on HVAC is this: “Role of HVAC&R Systems in Infectious Disease Transmission Addressed by ASHRAE.”  That’s the title of an official August 31 ASHRAE press release that began, “As health and school officials deal with a second wave of the H1N1 virus, commonly referred to as swine flu, new information is available on health consequences of exposure to such airborne infectious diseases and the implications on the design, installation and operation of HVAC&R systems.”

The referred-to information comes in the form of ASHRAE’s Airborne Infectious Diseases Position Document, which adds to the literature on sick building syndrome by addressing “the impact of ventilation on disease transmission, the disease[s] for which ventilation is important for either transmission or control and the control strategies that are available for implementation in buildings,” and which is available for free reading in full, in the form of a 17-page pdf, at ASHRAE’s Website.

In a statement accompanying the document’s release, ASHRAE’s president, Gordon Holness, explained the importance of HVAC to the swine flu situation in terms that extended the basic insight of sick building syndrome in new ways: “While the long-standing public health view is that influenza transmission occurs through direct contact or large droplets, newer data suggests it also occurs through the airborne route, meaning HVAC&R systems may contribute far more to transmission of the disease and, potentially, to reduction of that same transmission risk.”

Such a topic and such a document may not make for pleasant reading — who wants to be reminded about infectious disease, and especially swine flu? — but it certainly makes for useful reading, given what’s happening on the ground even as we speak.  We urge you to be smart and use it to your advantage and that of the people working in your buildings.