The Best Home Decor and Renovation Content to Stream 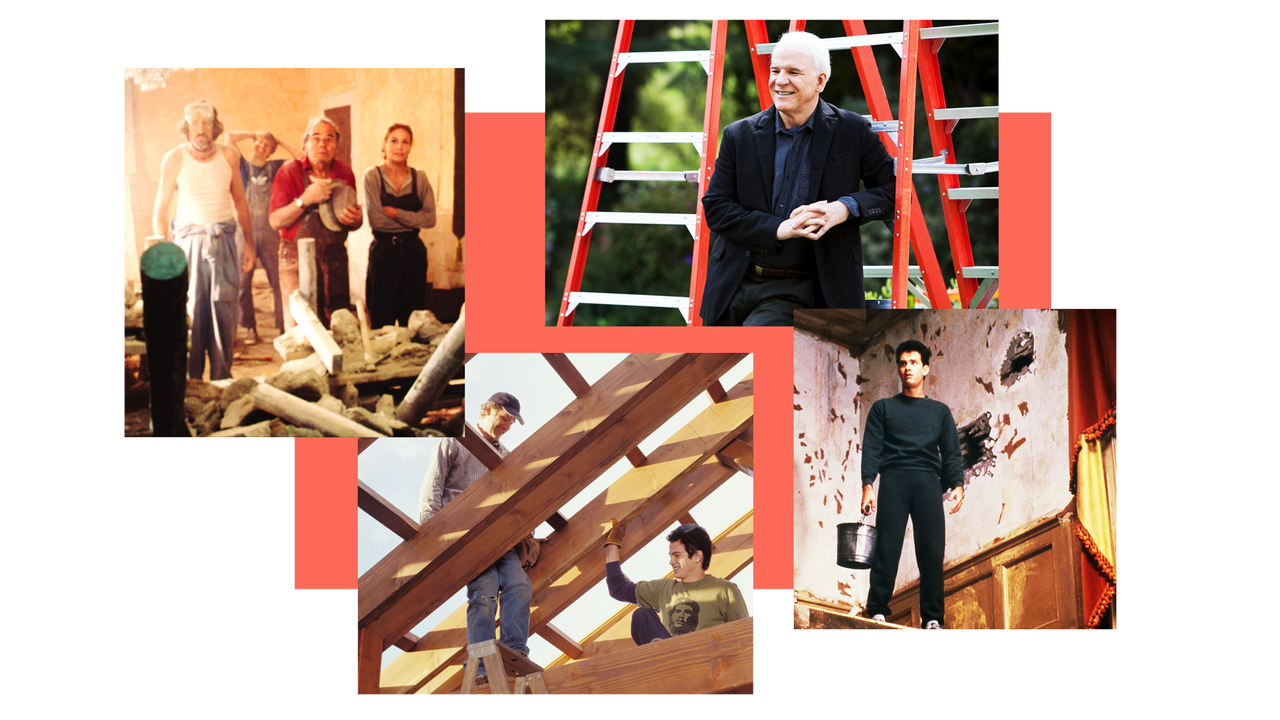 If spending what we may euphemistically call “a lot” of time at home has soured you on furnishings and paint colors that formerly charmed you, perhaps it’s time to visit other people’s mansions, condos, flats, and tree houses—if not physically, then through your screen of choice. Seeking inspiration for changes you want to make when you can safely call in a contractor or designer? Need a reminder that moving and remodeling have their downsides? Either way, you’ll find a title on this list that hits………...home.

Apple’s first documentary series takes viewers around the world to step inside unusual and innovative homes, featuring both the architects and designers who conceived them, as well as the residents who live there. (A particular standout is the season finale, which documents 3D-printed homes in a struggling town in Mexico.)

Want to look at a celebrity’s house, but not for so long that its luxury fills you with rage? Open Door is for you! In each episode, a different star, such as Terry Crews, Zachary Quinto, Robert Downey Jr., and Ricky Martin, guides you on a tour of their home—with every episode clocking in at less than 10 minutes. Find the series on Hulu.

Though contemporary suburban houses tend to be built according to a limited number of mega-builders’ designs, builder and designer Jasmine Roth helps homeowners discover the secret personalities of their homes by adding unexpected features.

Chip and Joanna Gaines making over houses in Waco, Texas, in Fixer Upper? That’s old news. Get on board with Ben and Erin Napier, who make over houses in Laurel, Mississippi—and do it now, because a spin-off, Home Town Takeover, is coming in 2021.

After a shipping container has finished its job of bringing us DVD players or Tickle Me Elmos from China, why should it go to waste? This (unfortunately short-lived) show documents how shipping containers can be recycled into homes—both in stories about home buyers comparing finished container homes for sale, and property owners designing and building their own container homes to their particular specifications. The series is free to stream for Hulu subscribers.

Some people dream of a second home on a beach, or a lake, or in the woods. Others think a house in the woods is kid stuff and hire master tree house builder Pete Nelson to build them a custom tree house, which is what this Animal Planet series documents.

On the eve of his 30th birthday, avid traveler Christopher Smith decides he’s ready to settle down in one location: specifically, a five-acre plot in the mountains of Colorado, where he plans to build a tiny house. Smith’s lack of construction experience neither deters him from embarking upon this project nor documenting it on film with his girlfriend (and codirector), Merete Mueller. Available to stream for rent or purchase on iTunes.

Once upon a time, Christina and Tarek El Moussa were married real estate agents flipping houses in Southern California and costarring in this tremendously popular show about it. Then Tarek and Christina got divorced and continued to costar in this show—and why not, what with it spawning six spin-offs! (Seven, if you count Christina on the Coast.) Watch for the remodels, or to see if you can tell when the cracks in their relationship started to form…

Documentarian Lauren Greenfield started making a film about millionaire real estate developer David Siegel, his wife, Jackie, and their construction, outside Orlando, of Versailles, slated to be one of the largest single-family homes in the U.S. Then the economic downturn of 2008 drastically affected the family’s finances, requiring such economies as, in one memorable scene, Jackie renting a car from a commercial agency and assuming it came with a driver. Come for the scenes of the vast, unfinished, yet somehow still vulgar mansion; stay for the fascinating character study of Jackie.

Burned off two episodes at a time in a notably fallow period for NBC comedies that also claimed the Lennon Parham–Jessica St. Clair sitcom Best Friends Forever (RIP), Bent stars Amanda Peet as Alex, a recently divorced lawyer who hires Pete (David Walton) to renovate her kitchen. In the process, both Alex and her daughter, Charlie (future The Act star Joey King), grow closer to Pete and his crew, which includes Clem (J.B. Smoove) and Gary (Jesse Plemons).

Did someone say kitchen renovation? This Nancy Meyers joint is mostly about Jane (Meryl Streep) falling into an affair with her former husband, Jake (Alec Baldwin), despite his having married Agness (Lake Bell), the woman with whom he was cheating when he was married to Jane. But it’s also about Jane getting a wild hair to redo her already gigantic kitchen even though she also has access to the kitchen in the commercial bakery she owns, in the course of which she meets charming architect Adam (Steve Martin).

Couples who are at odds as to whether to fix up their home or sell it enlist the help of designer Hilary Farr and realtor David Visentin. With a budget supplied by the homeowners, Farr attempts to deliver all their must-haves to remain in the house (“Love It”), invariably finding expensive problems in the walls or under the floors that eat up half her funds; David does his best to find homes they can afford in their preferred neighborhoods and that they like better than their current home (“List It”). Spoiler: If it’s a straight couple, they virtually always end up doing whatever the wife wants. Sorry to be heteronormative, but I’ve watched the show a lot and it’s true!

People looking to relocate to exotic foreign cities are shocked to find out how much or (more often) how little their budget can actually stretch, and what home features they’re unwilling to compromise on. Do not make a drinking game out of how often a buyer claims they need a guest room for all the visitors they’re sure they’ll be hosting after they move, because you will die. (Select seasons of the original House Hunters, for U.S. locations, are also available to stream on Hulu.)

The House Hunters franchise has its charms, but suffers sometimes from featuring home buyers who are veterans of the process and pretty much know what they’re doing. Property Virgins is House Hunters for people purchasing a home for the very first time, and who thus may have very dumb questions or an extremely unrealistic notion of what they can actually afford. If you’ve been around the property block a time or two, watching these poor newbie idiots can be both touching and hilarious.

Frances Mayes’s memoir is the basis for this scripted film, in which Frances (Diane Lane) loses both her husband and, in the divorce, her house. On the urging of her best friend Patti (Sandra Oh), Frances takes a vacation to Tuscany, where she impulsively buys a villa and gets to work fixing it up, in the process acquainting herself with the quirky locals.

Architectural-model fabricator George (Kevin Kline) is fired when he refuses to build digital models, preferring to make physical models by hand. On his way out, he faints, and then learns he has untreatable cancer. With the time he has left, he decides to demolish and rebuild his house, drafting his miserable son, Sam (Hayden Christensen), to help him.

Before AppleTV+’s Home, there was Grand Designs, in which host Kevin McCloud takes viewers inside the process of constructing an extraordinarily elaborate home—though Grand Designs presents more of a “warts and all” experience for the viewer, documenting cost and schedule overruns.

An adaptation of the best-selling 1946 novel of the same name, this screwball comedy stars Cary Grant as the titular Jim Blandings, an ad exec whose family is outgrowing its New York apartment. While his wife, Muriel (Myrna Loy), wants to stay in their current home and make room by knocking out a wall, Jim becomes enraptured by a stately home in Connecticut and purchases it with plans to remodel, not knowing it’s an infamous death trap that will resist their efforts.

These days fewer people may be familiar with the first Blandings film than with its ’80s remake: The Money Pit. This time it’s attorney Walter Fielding (Tom Hanks) and his girlfriend, classical musician Anna Crowley (Shelley Long), who decamp to a shockingly affordable mansion after they’re evicted from their apartment in New York. The house is a steal because the owner says she needs to sell it quickly, and fixing it up sorely tests their relationship.

For the Blandings completists: That’s right, it’s another remake (and also a sequel to 2005’s Are We There Yet?, which was unaffiliated with Blandings). After marrying Suzanne (Nia Long), Nick (Ice Cube) decides the two of them and Suzanne’s children from her previous marriage should move into a house in the suburbs, only to learn that the real estate agent (John C. McGinley) who talked them into buying it failed to disclose the many costly repairs it urgently required.

All products featured on Vanity Fair are independently selected by our editors. However, when you buy something through our retail links, we may earn an affiliate commission.

— Behold Dune: An Exclusive Look at Timothée Chalamet, Zendaya, Oscar Isaac, and More — How to Watch Every Marvel Movie in Order — David Simon on The Wire and His Equally Pissed-Off New Show, The Plot Against America — Beyond Tiger King: 8 True-Crime Documentaries That Sparked a Second Look From the Law — Downton Abbey’s Julian Fellowes on His New Series and the Beauty of a Scheming Woman — All the New 2020 Movies Streaming Early Because of Coronavirus — From the Archive: The Notorious Rivalry of Hedda Hopper and Louella Parsons, Hollywood’s Dueling Gossip Columnists

Looking for more? Sign up for our daily Hollywood newsletter and never miss a story.