Rain is no match for AC solution 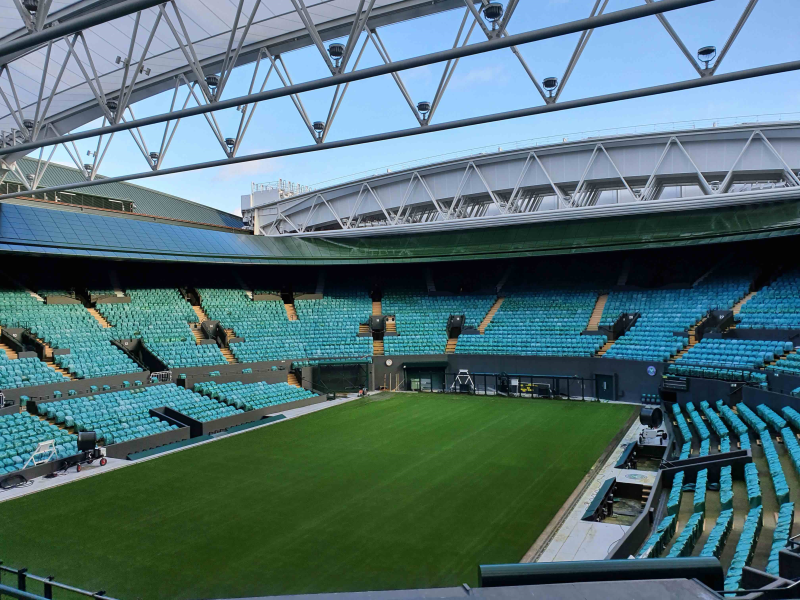 Rain has delayed many matches over the years at Wimbledon, the world’s oldest Grand Slam tennis tournament. But now it’s game, set and match as Aermec has provided a bespoke air conditioning solution that comes in to play when the retractable roof over No.1 Court is closed. Dawn Brissenden reports

Robert Deatker, estate director of AELTC, noted: “Our aim is to provide the finest stage in world tennis at The Championships and the refurbishment of No.1 Court was an important milestone in our master plan for the estate.

“Achieving the perfect conditions for playing tennis in such a complex environment is not a straightforward task. Aermec worked hard to engineer a solution that balanced humidity and temperature control to benefit both players and spectators when the No.1 Court roof closed during The Championships.”

A total of 26 super quiet chillers and 12 very low noise AHUs were specified. Noise levels were a major consideration. Twenty of the chillers and the AHUs were positioned at a high level within the stadium, and they had to be extremely quiet as many of the spectators in the higher tiers sit very close to the plant rooms which are located over the seats.

The uniqueness of the project, the location of the venue – surrounded by housing – required considerable planning and innovative designs. For Centre Court, the chillers are located away from the stadium, however this project was unique in the fact that the chillers needed to be installed within the structure, making it a one-of-a-kind project. Building on the success of their Centre Court involvement, Aermec worked on a totally customised approach which addressed an unusual combination of criteria.

Graham Turner, Aermec’s technical director, said: “Aermec is continually motivated to design solutions that meet clients’ expectations no matter how challenging. We engineered a solution that addressed a unique set of criteria; noise, comfort of spectators, safety of the players and the moisture levels of the grass to prevent players from slipping.”

“Everything had to work together, you could not just take a standard unit and place it on the site. Everything had to be made bespoke for the project to ensure that it would fit the specifications.”

A prototype chiller was designed and built at Aermec’s manufacturing and purpose-built test facilities near Verona in Italy. Rigorous tests were undertaken and once satisfied Aermec could meet the specifications and criteria, the AELTC was invited to witness testing of the prototype and sign-off the unit for manufacture.

Not only were the performance levels tested, but more importantly extensive acoustic tests were carried out in Aermec’s climatic chamber, which enabled site conditions to be simulated.

“Aermec has extensive testing facilities on-site at our factory in Italy. Our labs are AHRI and Eurovent certified and we provided extensive acoustic testing under ‘witness’ conditions enabling the AELTC to see at first hand performance levels and that acoustic criteria were being met,” said Paul Lawrence, Aermec UK’s managing director.

Once production units were completed, further testing was carried out to ensure peace of mind for the customer.

A similar process was adopted for the 12 very large bespoke AHUs. Each unit was designed with an air volume of 12 metres cubed/s. As spectators would be sitting underneath the plant rooms, Aermec’s solution had to ensure that there would be no breakout noise from the bottom of the units, detracting from the matches and causing a nuisance for spectators. The AHUs were fully performance tested at design conditions, which was only possible again due to Aermec’s investment in climatic chambers.

Aermec tested various acoustic materials over many months to ensure there was no breakout noise from the units. Once they had achieved the desired results, Aermec embarked on the construction of substantial steel frame work at the factory, which would enable the AHUs to be positioned 1.8 metres above the ground and sound measurements were then taken from underneath the units in situ.

Because of the AELTC’s location within a residential neighbourhood, sound levels were crucial. As the cooling plant was installed in the roof above the back seats of the audience, keeping noise levels low was essential. Every unit went through rigorous acoustic testing to ensure that they were as quiet as possible. Mr Deatker visited the testing facilities himself to make sure that the products were of the highest standard. This extensive acoustic full load testing was carried out through the night to ensure that no background noise would affect the test.

The chillers were delivered in phases from the start of 2014. They were super low noise slim chillers, each with a capacity of 300kW and fans capable of 320Pa External Static Pressure (ESP).

There were a number of logistical constraints. As well as meeting sound criteria, sight lines for neighbours in the area were to be maintained where possible, so careful consideration was given to height of any roof top plant and aesthetics.

Six of the chillers were located in the basement. The other 20 chillers were designed to fit within the tight physical constraints of the No.1 Court roof. To address the acoustic requirements, they were enclosed in five special acoustic pods, each pod contained four chillers in a 2x2 double-deck arrangement on the north side of the court and directly above spectators. The pods were designed to accommodate air intake on one side only.

Mr Deatker commented: “I’ve been really impressed with Aermec, seeing how much effort they put into each of those tests and how particular they are with getting the tests right.

“They knew this wasn’t a ‘tick in the box’ exercise. Every effort was made by the engineers to set up and operate the test correctly, it really showed me how proud they were of their product and the attention to detail undertaken; such culture aligns with the culture we have here.”

EC direct drive fans were used to ease commissioning and set design air volumes without the need for pulley and belt changes. Inverter pumps were also used with varying pressure control to ensure a constant flow rate as the quantity of chillers in operation increases and decreases.

The AHUs were arranged within custom-designed steel framework. Acoustic housings were unnecessary as the AHUs were designed appropriately to meet the noise specifications. Each unit has 50mm thick panels with mineral wool insulation 100kg/metres cubed and 1.2mm thickness galvanised steel internally and externally. The fan section has 150mm panels of extra insulation to reduce the radiated noise of the fan.

The AHUs were located within a complex network of steel and ductwork, with four situated on the east side of the court, four on the west side and four on the south side. The units were installed on the roof in sections and Aermec carried out the final connections once all sections were in place.

The retractable roof takes between eight and 10 minutes to close and the AHUs start up as soon as the roof is closed. Depending on the conditions, the air conditioning can take minutes to acclimatise the climate within the bowl and allow matches to restart.

One of the key challenges for Aermec working on such a unique project, was ensuring that the required levels of temperature and humidity could be met, and the grass could also be insulated from moisture, preventing players from slipping during play. Sensors are embedded in the edge of the grass court and further sensors are located in the roof trusses to monitor moisture and temperature levels.

What most people won’t realise about these AHUs and chillers is that they were not installed for the audience or the athletes, although both do benefit. In fact, these products were specified for the grass. Enduring that there is no humidity or condensation in No.1 Court is paramount to the performance of the players as if a single patch of the grass is wet it could lead to a player slipping.

When the roof is closed, the system drives down the humidity level to around 50 per cent RH to ensure no condensation can occur on the grass playing surface, or on the roof structure. The priority for the system was the grass and to ensure the air movement would not interfere with the movement of the tennis ball. All this was modelled by ME Engineers using computational fluid dynamics.

Whilst it might seem like this cooling plant is one of the least used around the world, as it is only needed when the roof is closed over No.1 Court during The Championships, this is in fact not the case. The AELTEC has utilised the cooling plant in the roof of No.1 Court and made it part of an Estate wide energy centre which feeds other areas of the site like the museum, futureproofing the technology.

Aermec worked with the AELTC and ME Engineers, who designed the full M&E services for the No.1 Court redevelopment, having also been involved with the Centre Court project. ME Engineers had worked on some of the most recognisable buildings in the world, successfully completing many stadium projects, and are considered to be the leaders in this field.

The close collaboration of all parties has resulted in a robust solution that was completed on time, addressed the client’s exacting criteria and ensures that play on No.1 Court will continue no matter the weather.